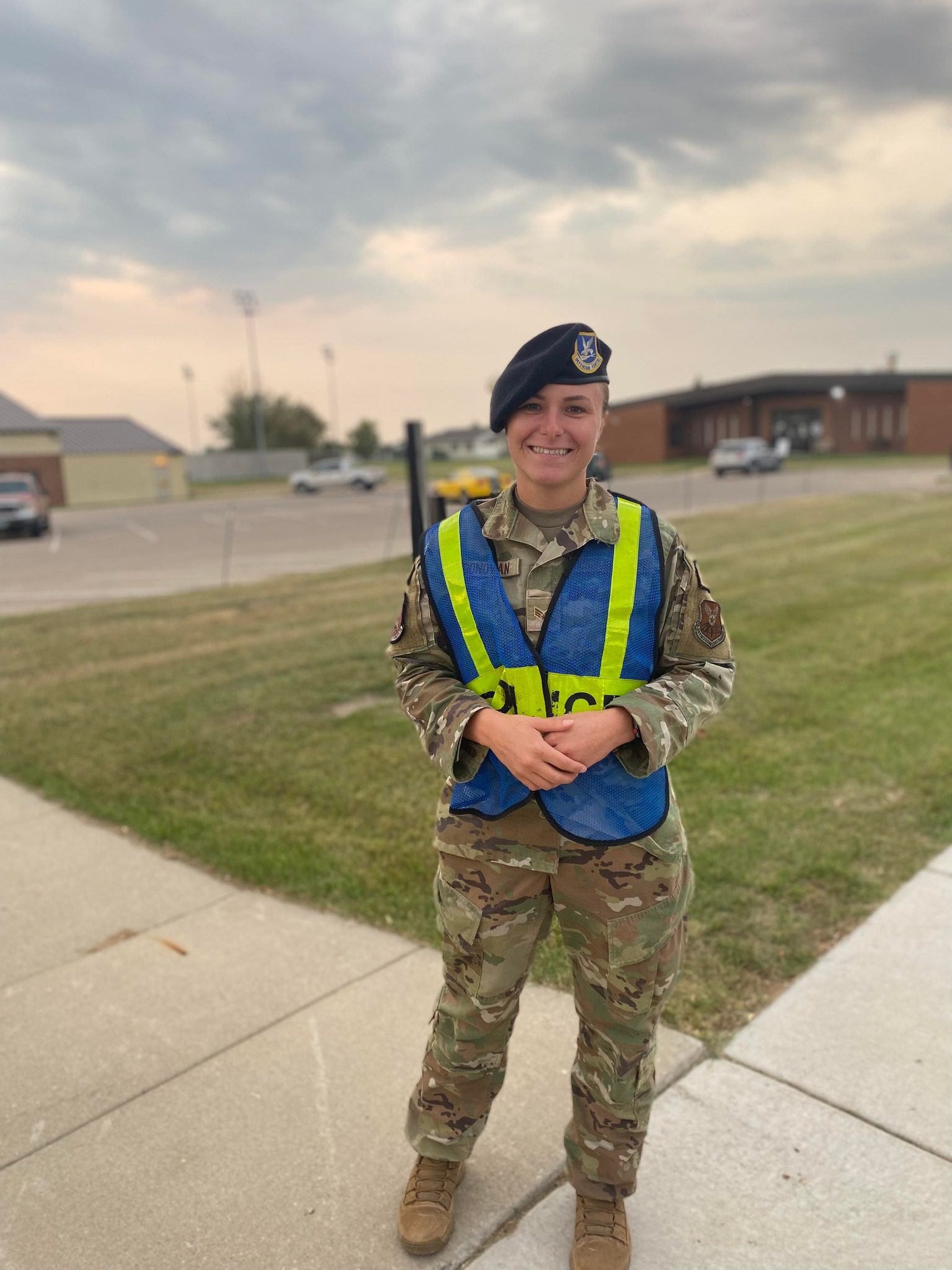 In the ever-changing Air Force, new programs and initiatives sometimes come and go based on needs of the base and military mission. Community Defender is a new concept the 5th Security Forces Squadron came up with back in Summer 2022 to bring a resource that connects the base community to the base security professionals directly.

To find out more about how the Community Defender program got started and its mission, see the article published in 2002, which introduces the position description and also what became the Northern Sentry’s most popular and viewed article of 2022. https://northernsentry.com/2022/09/01/minot-afb-homes-andsecurity-forces-team-upmeet-your-new-community-defender/.

SrA Hannah Donovan, 5 SFS, was chosen to take on this conceptual new position of the Community Defender back in the summer. Nearly half a year later, the Northern Sentry wanted to catch up with her and find out what she has been doing in the unprecedented role, and what/if any changes have been made to the base or program in this amount of time. Although Donovan was on leave and preparing for her PCS next month to Langley AFB in Virginia, she graciously took some time to meet and explain how the last few months as Community Defender on Minot AFB had affected her life, career and the base so far.

When asked what her biggest contribution to the base had been in the role, Donovan replied that it was by far the Minot AFB Home Pet Policy. She explained that Security Forces would often get calls and complaints about loose pets on base. The previous pet policy, which had not been updated since 2014, was vaguely written and stated that Security Forces were responsible for handling loose pets. Being that SF members do not have animal handling training or necessary equipment or facilities to do so safely, this policy needed to be revised.

The new policy, of which Donovan was instrumental in creating, allows a more specific and guided plan for loose animals on the base. TSgt Montie Butler, 5 SFS, said, “Ward County Sheriff’s Department has jurisdiction on the installation so SrA Donovan worked with both departments and established a Memorandum of Understanding (MOU) in between the Sheriffs and the Police Department which then allowed the Minot PD to gain jurisdiction to pick up animals (only) and transport them to Minot Veterinary Clinic.”

Another base issue that Donovan has been able to influence while at the Community Defender position is that of speeding on base, specifically within housing areas. She mentioned that because of this concern expressed to her through the community, Security Forces were able to rearrange daily plans to get more patrols throughout neighborhoods, thus having more of a presence to decrease speeding offenders. She said this and the fact that many Paladin Defenders now are LIDAR (light detection and ranging) speed gun certified and the increased patrols has decreased speeding instances on base tremendously.

During the warmer days of the year, SrA Donovan could be spotted helping with traffic at the schools in the mornings and afternoons. She was a soothing presence for both kids and parents alike. She said she loved handing out the “Dairy Queen Free Ice Cream” coupons to kids on base wearing helmets on bikes and simply being able to talk and be there for people.

When asked about a memory she will take away from this position about serving the community, she shared a heart-warming story about how she helped locate a girl on base who had run away from her home. When the girl was found, SrA Donovan was able to talk to the girl and be a reassuring presence to the little girl. According to the girl’s parents, the girl had been having some issues with testing authority. Months later, SrA Donovan saw the girl and her parents again around base. Although she did not speak to the girl again, her parents then told SrA Donovan that after that time, their daughter had been doing much better and often references her conversation with SrA Donovan. It touched Donovan’s heart to know she had made a positive difference in the life of one little child.

Even though SrA Donovan is leaving her position as the Community Defender on Minot AFB, she wished she could have stayed longer and said the last few months have brought out so much good in her.