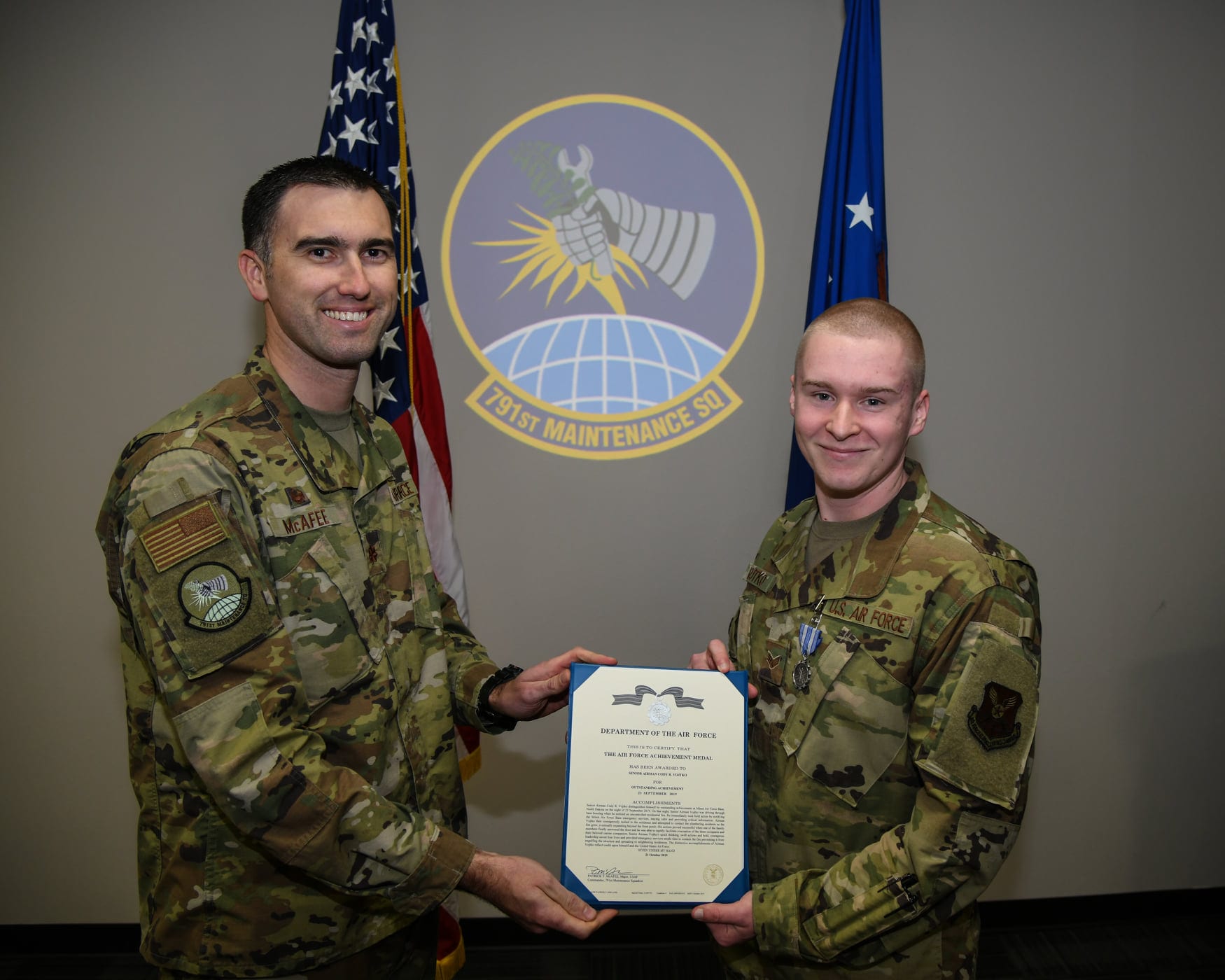 MINOT AIR FORCE BASE, N.D. —
In the dead of night, a lonely truck’s headlights swept across a quiet housing community. The lights fall upon a house unlike the others.
Slowing down, he saw it, a yellow and orange light flickering inside of the house, a plume of gray smoke escaping from a window.
“I knew they might have been harmed if I didn’t step up,” said Senior Airman Cody Vojtko, missile maintenance operations controller for the 791st Missile Maintenance Squadron at Minot Air Force Base, North Dakota. “If I didn’t do anything and someone was hurt afterwards, I have no idea how I would feel.”
Vojtko jumped out of his pickup and raced towards the house, the cold air stinging his face. He pounded on the door, frantically trying to get attention from the family inside. He shook the door handle to no avail. Unable to pry the windows open, his mind is racing, looking for anything he could do to get inside.
Vojtko stayed calm. Dialing the base emergency number, he told the operator everything. After a first responder arrived, he was relieved.
“If you see something, do something,” said Vojtko. “Don’t ever be afraid to help someone who may need it.”
After what seemed like forever, the front door finally opened. As the family escaped the house, Vojtko helped control the situation. He facilitated the family’s escape along with their dog.
“It was very rewarding,” said Vojtko. “Knowing that they all got out with no injuries. It’s an amazing feeling.”
Vojtko’s actions earned him an Air Force Achievement Medal, awarded by his commander, Major Patrick McAfee. What Senior Airman Vojtko did for his wingman displays the ultimate dedication to help people in need. He was willing to put his life on the line for this family.
Vojtko’s supervisor Staff Sgt. Jordan Gleave, senior missile maintenance operations controller for the 791st Missile Maintenance Squadron, says this isn’t unlike his personality at all.
“Airman Vojtko is an exemplary Airman,” said Gleave. “He has an intense worth ethic, and has never failed to put his best foot forward to help anyone in need.”
His willingness to always put himself out there is uplifting, says Gleave. She hopes Airmen across the Air Force can learn from Senor Airman Vojtko’s willingness to sacrifice.
“I knew what I had to do,” said Vojtko. “I had to get their attention and save whoever was in that house.”