She’s Not From Around Here: Northern Hospitality 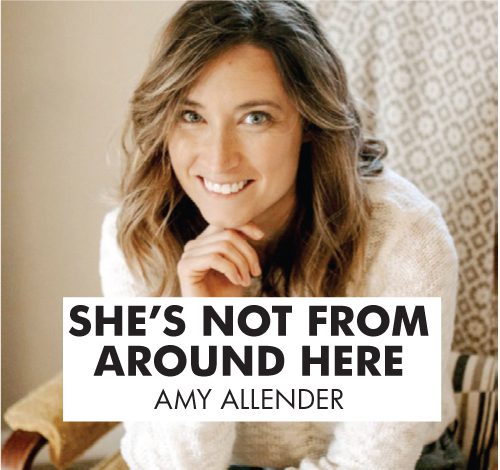 Tears of self-pity leaked slowly from my eyes, down my cheek, and onto my pillow. Just a few days after Christmas, I found myself curled up in a tight ball on my bed in the middle of the afternoon—trying to hide from “one of those days.”

Little things, like a morning gone awry, a misplaced curling iron, spices toppling out of the cabinet, a toddler refusing to nap, and a birthday leaving me feeling old and unaccomplished seemed to stack up into one big thing. All those little things, combined with the fact that in the rush of the holidays, I hadn’t taken time to make birthday plans—created a mountain of mess and caused my usually-positive mindset to topple.

The self-pity was just about to swallow me up when my phone rang.
It was my neighbor. She had an actual problem.

She and her two, teenage children were preparing for a cross country move. All of their possessions were in boxes, and this was the day movers were supposed to come load the trailer. Except, they arrived late, then claimed the sidewalk was too icy, then said they shouldn’t even start because it would be getting dark soon, anyway. Then, they left.
Now what? They needed some extra hands and muscle. Did I know anyone who could help?

There’s nothing quite the opportunity to help someone in need to snap the little things back into perspective.
In ten minutes, I was standing amid boxes, assessing the scope of the job. While I thought about who I might be able to call, I carried boxes to the moving trailer. It was the middle of a weekday in the hazy space between Christmas and New Year. Most people I knew were traveling for the holidays, or working.

While I didn’t know exactly who to call, I knew this problem would be resolved. I said with confidence, “We’re going to get things loaded up. You’ll be ready when the driver comes tomorrow. This will be okay.” And I knew it was true.
Many people think of Minot as a small town. Compared to many places, I suppose it is. But I find that people are usually surprised to discover Minot has a population nearing 50,000 residents. Not exactly a tiny.

Minot seems small because more than anything else, this is a community. It’s not just a city, it’s not just a place to live (or a place to watch the clock tick until your next military or work assignment). It’s a place that can offer love, support, and comradery if you open yourself up to that possibility, and invest in taking part in the community yourself.
I knew we’d find enough help because I know Minot. This is not a place whose residents are so blinded by their own problems that they cannot step out to help when someone else is in need.

My favorite illustration of Minot’s collective attitude toward others is seen in the response to the devastating 2011 flood. Water surged through neighborhoods, destroying homes, displacing 11,000 residents (according to the City of Minot website’s flood chronology.)

Yet, with all of those who were displaced, an emergency shelter was never used. Residents with dry homes offered up every spare inch they could muster so their neighbors would be cared for.

It’s not about knowing everyone. It’s not about solving the problem all by yourself. It’s not even about being a local, or being a transplant. Just as little things going wrong can start to seem overwhelmingly large—little helps done in love eventually culminate into a force strong enough to carry even a massive burden.

I contacted a men’s group at our church. My neighbor called a few friends. Her daughter called a few friends. People showed up. Boxes were moved one by one. Piece by piece furniture was carried and loaded. The hardship and the stress were still there. But things were okay. The truck was loaded when the driver arrived the next day.
It’s no secret that some people dread moving to Minot. I get it. It’s easy to be blinded by the stories of harsh winters and Decembers swallowed up by hours of darkness. Don’t be.

Those things are fleeting.

Winter faithfully gives way to spring. Short days will always melt away into days of disorienting amounts of light. The constant here is the neighborly love exhibited by this community, the willingness to help one another—no matter the season, the human kindness that never waivers. It’s northern hospitality at its best.

No, this isn’t a perfect place. Yes, there are also acts of unkindness. But overall, this is a good place. It’s a good place when you look for the good, and I count myself blessed to be another year older, and living in Hot Dish Land.
To hear more stories from my Not From Around Here life, or learn about the small things that can make a big difference in maintaining a positive mindset, join me on Instagram (@amy_allender), Facebook (@amyallenderblog), or at my website amyallender.com.

← Prev: Upside Down Under: The forgotten Sioux tribes… Next: A View From Our Side: You Just Have To Chuckle →