Nothing Can Stop the U.S. Air Force (and families) 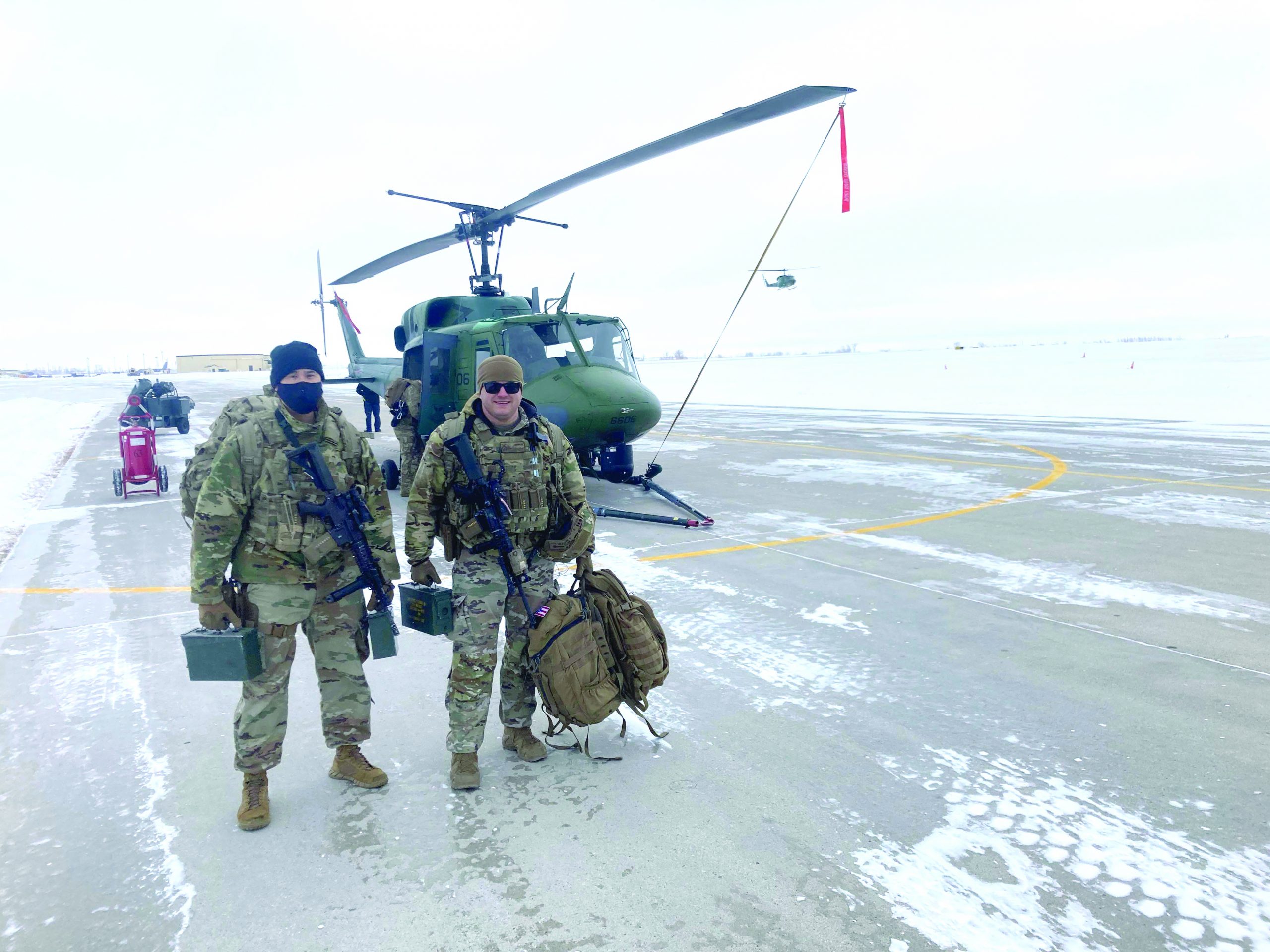 SSgt Simon Yue, SSgt Corey Anderson and other members of the 91 MSFS, 791 MSFS, 741 MS, 742 MS got a special Huey transport after being snowed in at a missile alert facility.

Wow, what a shock to the system this last week has been! First the epic 3-day blizzard, then the heart stopping cold front which brought negative high temperatures. Phew, North Dakota is not for the faint of heart! Many people on the base are transplants from warmer climates and for a first timer here, this intense cold can come as quite an awakening. Dealing with the extreme weather at Minot AFB means extra time at home for some but also extra work for others.

Even though it is no secret that Minot suffers intense cold and deafening winters, even the seasoned North Dakotans can find it hard to cope when faced with situations like last week. That being said, roads were cleared, driveways were freed and neighbors were once again there for each other to borrow items or give away food to those in need.

Many of our base families enjoyed the extra time at home while schools were canceled. Families posted photos of playing in the snow with pets and families. Many also shared their exhausting and humorous shoveling driveway stories on social media. As always, when tough times hit the base, the true generous spirit of the neighbors always shines through. This storm was no exception.

However, military missions always have those who not only didn’t get a break, but sometimes must work even more than expected. While there are likely many that had to face the treacherous weather conditions, members of the 91st Missile Security Forces Squadron and 741st Missile Squadron extended their postings in the missile field due to weather conditions. For those that don’t know, the missileers who man launch control centers and Defenders that help protect the nuclear weapons go out to various sites and locations around North Dakota and stay at Missile Alert Facilities, otherwise known as MAFs, for a week at a time.

Because of the weather and road conditions, however, they were unable to return and switch out with their relief elements as planned, which means families at home were forced to endure the storm without spouses and, with the holidays quickly approaching, projected leaves taking an impact. While these base families are used to time away from spouses, the extra days for them at home and the Airmen in the field are just another way of life for the military families.

Although most of the roads were cleared sufficiently for missile crews and Defenders to change over, one MAF was socked in with snowed out roads that remained impassable despite the county’s best efforts to plow them. With some rapid planning and teamwork, leaders from the 54th Helicopter Squadron, the 91st and 791st Missile Security Forces Squadrons, the 741st and 742d Missile Squadrons organized an airborne relief plan to that MAF to bring fresh personnel and supplies and rotate out those who had been on extended field duty. Members of the 91 MSFS and 741 MS were happy to be home and got the unique perk of getting a helicopter ride in subzero temperatures.

When asked why helicopters were deployed in this particular situation, 54 HS Commander Lt. Col. Jared Hann said, “One of our primary roles as Minot AFB’s helicopter squadron is to support the 91st Missile Wing. The 91 MW asked for assistance due to poor road conditions around a specific MAF and we were able to easily transport missile crews and security teams to and from the MAF.” He continued to explain the situation saying, “We had four pilots and two SMAs (Special Mission Aviators) doing the flying. However, we also had numerous support crews to include six maintenance personnel, two whole additional crews on standby to man aircraft if the process was prolonged, multiple individuals who showed up to the squadron extra early to clear snow from the walkways, and the 54 HS/DO on the ground coordinating each lift.”

Once again North Dakota weather plays its games with the base, but the base always fights back. Hahn explained how Minot AFB handles tough weather when he said, “… we were able to bring our Airmen home and continue the mission without missing a beat.”