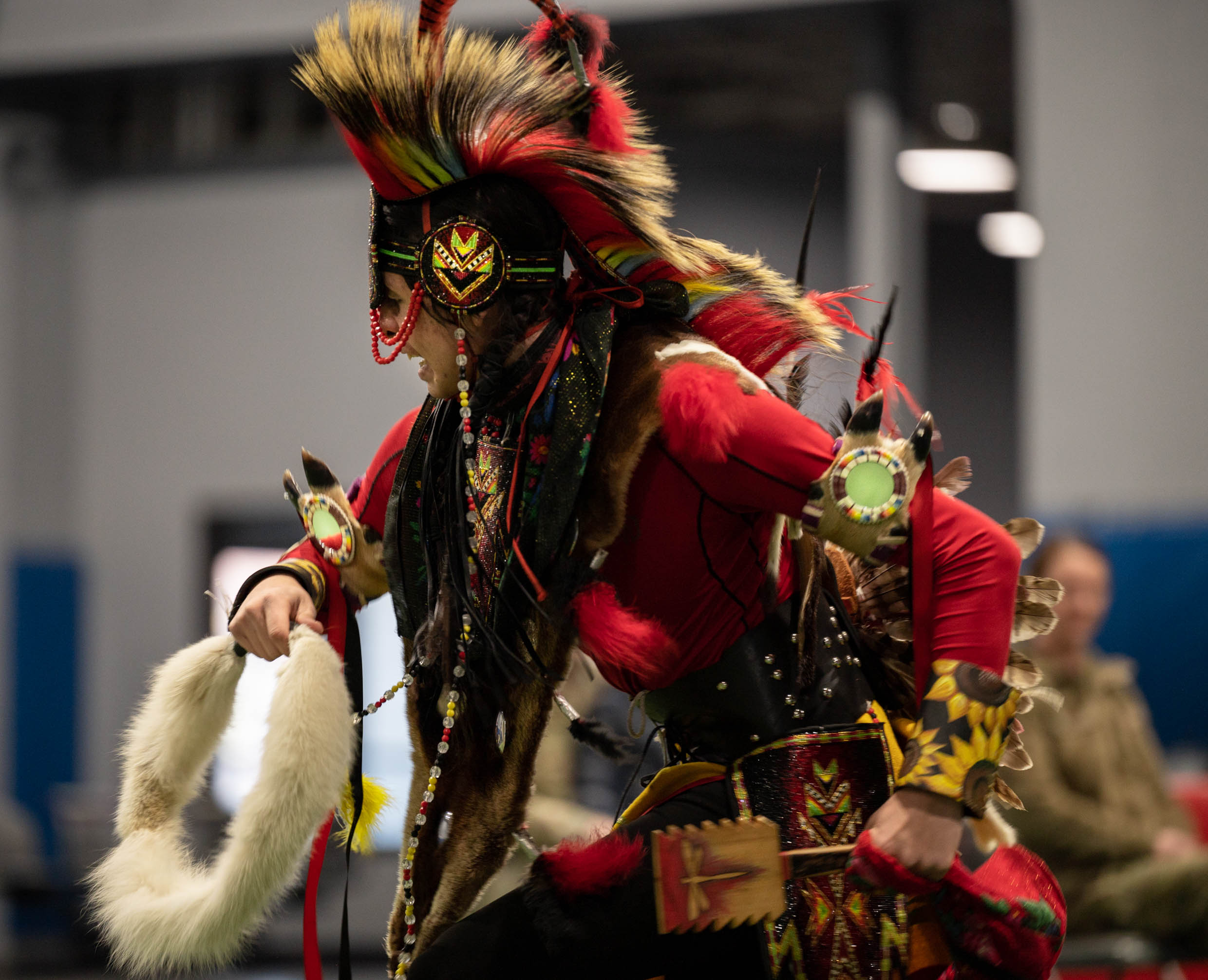 MINOT AIR FORCE BASE, N.D. — Team Minot observed Native American Heritage Month in November with events such as a proclamation signing, a veterans panel and a closing ceremony. The month was a time for Airmen to learn the history and culture of Native American communities.

At the panel, civilians and veterans expressed their previous experiences with the military as Native Americans. This panel allowed attendees to learn about the struggles and triumphs of previous warfighters.

“I am proud to serve the country,” said BJ Rainbow, a former Corporal in the U.S. Marine Corps. “I joined because I’m protecting nations within a nation. We have a connection to this land, [and] to the elements on a spiritual level.”
During the ceremony, held on November 30, attendees had the opportunity to learn about and experience the culture of local tribes and Native American Airmen. Ceremony attendees were introduced to the personal collection of Tech. Sgt. Pashala Lewis, a Native American Airman from the Quinault tribe located on the Pacific coast of Washington. Items in the collection included traditional bands, blankets and ceremonial wardrobes. The items belonged to his family and had ceremonial and cultural significance.

“I believe it’s important to share information about my tribe because I think it’s essential to educate people about the differences in cultures of Native Americans across the U.S.,” said Pashala.

Kobe Morsette and Sage Casas, two dancers from the Mandan Hidatsa Arikara Nations, performed a Prairie Chicken dance, a ceremonial dance used in competition, at the closing ceremony. After the performance, the dancers answered questions about their traditions, dance and regalia. The regalia is a powerful mode of self-expression blending historical and modern dress. Each different dance is a way of expression, a language in itself. These dances are used in many different celebrations including but not limited to harvests or seasonal changes, marriages, and competitions. Opportunities like these are thanks to the hard work of the Minot Air Force Base Native American Council that strives to create learning opportunities for Airmen on base.

“I believe that with the military being so diverse, it brings a lot more insight and innovative ways to get every mission done,” said Staff Sgt. Christopher G. Henry, the Minot Air Force Base Native American Council president.
Across the Air Force, diversity of backgrounds, experiences, demographics, and perspectives are essential to our success in an increasingly competitive environment. The United States military and its diverse branches create a culturally rich and operationally relevant military that can effectively accomplish various missions.

Mr. Sage Casas, a competitive dancer from the Mandan Hidatsa Arikara Nations, performs a ceremonial dance for members of Team Minot during a closing ceremony for Native American Heritage Month at Minot Air Force Base, North Dakota, Nov. 30, 2022. The ceremony was held to celebrate Native American Heritage Month and it showcased the diversity of not only Minot Air Force Base, but its tribal neighbors.

← Prev: STARBASE at North Plains Elementary Next: Upside Down Under: Pembina, unique in North Dakota… →