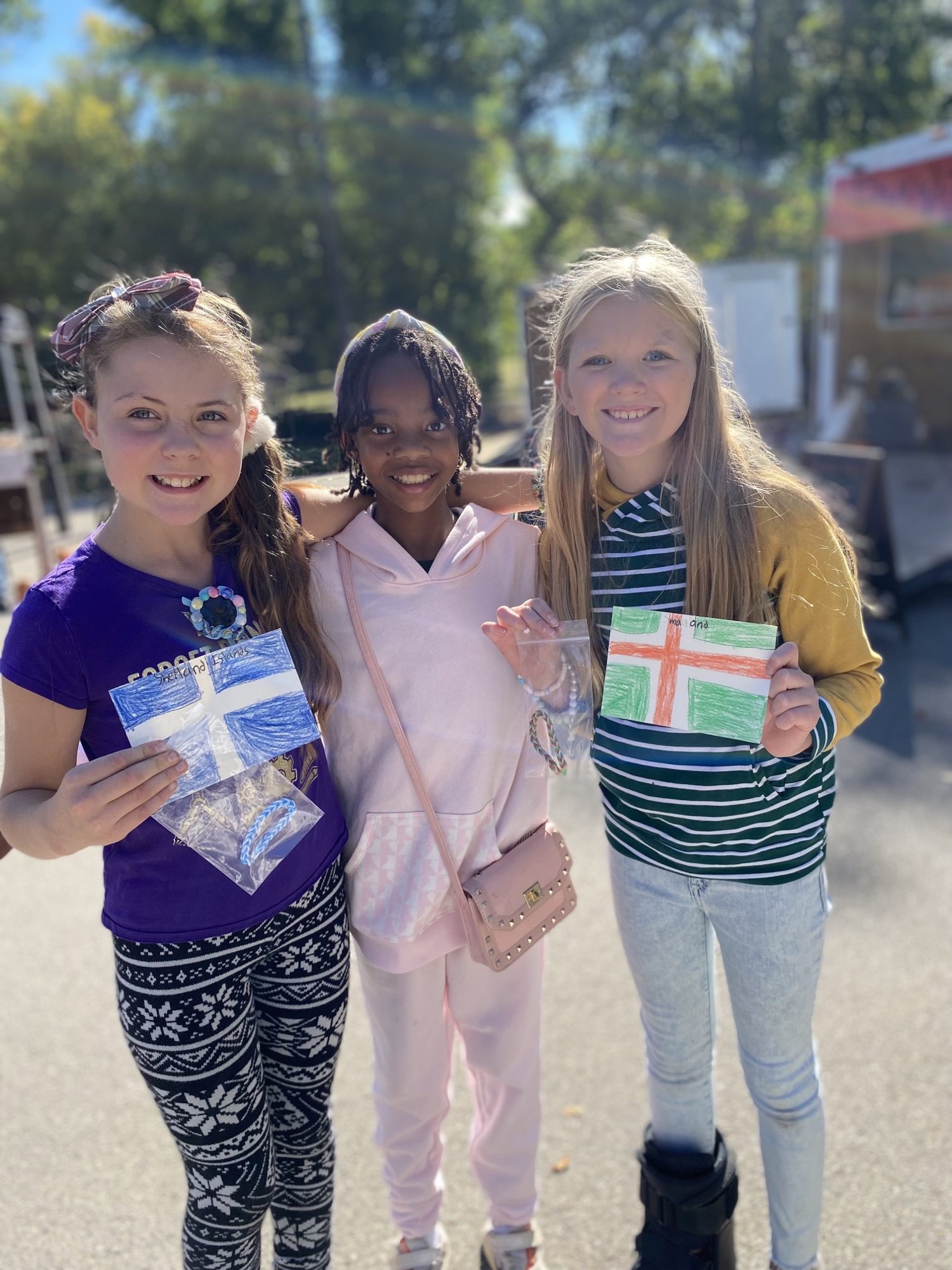 Wow, it’s Saturday, I’m selling at the Farmers Market! “Laurel, we need to pack up all of your bracelets. It’ll also be cold, so you need to bring your hoody.” Mommy said. I grabbed all the bracelets and my board. Quickly, I put on my jump suit and an extra layer of pants underneath since it was loose. When I went downstairs, I ate a quick meal and made sure I had everything.

Mommy grabbed a table and two chairs, then we drove off. Hopefully I sell out today, or at least sell half of it.
When we arrived, it was packed! Last year, there were twenty to thirty people selling. Now there’s almost fifty participating! We stationed on the other side of the market, which made me disappointed. Rather be at front when everyone sees you first and buy your item before the others. The exciting part was getting ready. As I unpacked, I put my “Funny Wears” on the left, “Fuzzy Sticks” in the middle, and “Nordic Wears” on the right. My business was named “Never Forget a Friend” because of my BFF [Best Friends Forever] in Germany, Leyla.

Leyla was my first BFF. We would both play, talk, listen, then play again. Both of us lived off base, went to the same school, and were in touch. Before I moved, we made rubber band bracelets. She also wanted to sell some bracelets while she was visiting the beach in Italy. Making bracelets took a sixth of our play dates or more. It was very heartbreaking when I moved, but when my mom told me about the kids’ market, I wanted to join. So, I sold bracelets to connect people when they needed that memory and happiness.

The bell rang loud and clear, catching my attention. People started entering the Farmers Market with interest. Next to us was two kids selling beaded bracelets and other items with beads. I looked around, only seeing a couple people roaming around. It just started, I thought to myself.

“Hello there,” said a lady with white hair. “Well, what are these here?” After explaining my story and my goods, she took a bracelet, one of the “Funny Wears” which were two dollars each. She also talked with Mommy. It also turned out that the lady also once caught a type of disease that had an effect of hair loss. This made me sad and mad. Could’ve God made a perfect world, or did humans cause these endless disasters and horror?

As I waited for more customers, my mom heard a creepy scream and asked, “What is that?” “I have no idea.” replied the mom next door. “It’s kind off creepy to me.” Mommy continued. After a while, some teenagers came up and asked what we were selling. Of course, I introduced myself and my story. They were impressed by the flags I matched with each bracelet for the “Nordic Wears.” My mom said, “I never knew there were that many Nordic countries out there.” One teenager replied, “Yeah, there’s a bunch of them alright.” Continuing a little longer, they sadly didn’t buy anything, at least I thought Mommy liked the talk.

A while later, it finally got warmer as more customers arrived. Including my little brother, sister, and Daddy. They also brought plenty of Chai Tea! Then the scream was heard again, this time next door! Turns out, it’s called a death whistle, which was used in real life wars. It was shaped into skulls, dragons, and other figures.

“You can sell a little longer, seems more people are coming later.” said the manager. To my surprise, a kid from my school came to buy a “Fuzzy Stick” for a dollar. Three other people before him took three “Nordic Wears,” which costed them eighteen dollars in all.

The last customers were two girls who each wanted a “Nordic Wear.” They only had ten dollars to give, even though they needed twelve. I took two dollars off so they could enjoy their gifts. Afterwards, I also promised a bracelet to one of the ladies working at the Farmers Market.

It was quite a day! I met many customers, had fun, and earned money. As we packed up, I gazed at the sky. Will this happen again next year, or will it evolve more and more? When we hopped into the car, I looked back. Most of the sellers packed up and left, a few were still staying to get more customers. I should continue this business with pride and bring others together. Ultimately, I learned everyone has different perspectives, outlooks, backgrounds, and experiences.