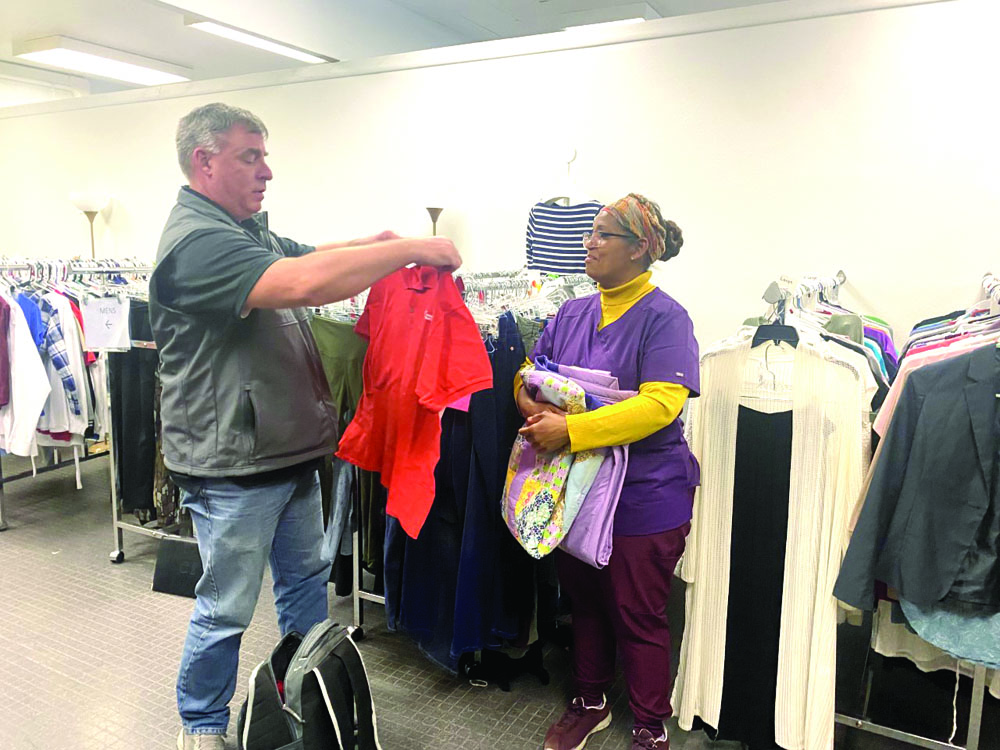 Jeff Kazel, Red Cross Regional Director and Military Veteran presenting Ana Charles with gifts of thanks for her outstanding service as a Red Cross Volunteer with the Minot AFB Airman’s Attic

On Thursday, October 20th, four members of the Chapter of Red Cross serving North Dakota made a special visit to the Minot Air Force Base Airman’s Attic. The team made the trek to honor and show support for one of their most loyal and hardworking volunteers, Ana Charles, as well as to discover the unique outreach of the Airman’s Attic itself. The team presented gifts to Ms. Charles as a thank-you and discussed the vast number of ways the Red Cross supports the people of Minot AFB.

Ms. Charles has served as a Red Cross volunteer for over 10 years. She is the mother of Master Sgt. Penny Valesquez, 5th Logistics Readiness Squadron, and has moved with her active duty daughter through several PCSs. Ms. Charles began serving in the Red Cross when her family faced an emergency situation. Ms. Charles said that within hours, the Red Cross had her family by her side, and it meant everything to her. Because of her experience, Ms. Charles thought it important to show her gratitude and ‘pay it forward’ to the organization. She has been serving military bases and communities on behalf of the Red Cross ever since. Because of her longevity of service, Jeff Kazel, Regional Director of the Service to the Armed Forces and International Services, presented Ms. Charles with a homemade Red Cross quilt. The tradition of the quilts began during World War II when quilts became a huge necessity during the raids and were of great value to soldiers on the front line. The Red Cross has kept this touching tradition alive to show their gratitude.

During the refreshment portion of the afternoon, Mr. Kazel also officially asked Ms. Charles if she would serve as the Lead Volunteer for the Red Cross Chapter of Western ND. With a heartfelt smile, Ms. Charles agreed.

Ms. Charles has many skills, specifically in the medical field, that she has been able to use for the benefit of the Red Cross through the years; however, here at Minot the need for volunteers at the Airman’s Attic became apparent and the Red Cross asked Ms. Charles to serve in this capacity.

The Minot AFB Airman’s Attic is a FREE, non-profit, self-service, thrift store open to families and AD of ranks E-6 and below for their normal hours Monday and Wednesday 5-7 p.m. and Saturday 10 a.m.-12 p.m. On the third Saturday of every month the Attic is open to all ranks, dependents and retirees too. The Attic serves as a free resource and extra benefit to those on Minot AFB. The shop is filled with a plethora of uniforms, kitchen items, clothes for both adults and kids and LOTS of other cool and interesting items – all FREE! Currently, the Attic has lots of Halloween costumes, so stop by if you need something last minute!

The Attic is a project of the NCO 5/6 Club and is organized by Tech. Sgt. Chad Graham, 891st Missile Security Forces Squadron. He was unable to be in attendance for this special event due to mission requirements.

When the Red Cross team made the sincere presentation, they also discussed the purpose of the Red Cross to military bases and their history of serving the military which dates all the way back to founder Clara Barton serving as a nurse in the American Civil War. Jeff Kazel informed those present that the Red Cross does more than CPR, lifeguarding and first aid classes; they also offer resilience classes directed specifically towards the military personnel and families. They also are always looking for volunteers in a very wide range of capacities.

The Red Cross likes to utilize volunteers’ talents and skills to set them up in places where they can serve with pride and thrive. To find out more information about volunteering with the Red Cross, go to https://www.redcross.org/volunteer/become-a-volunteer.html#step1.

← Prev: Minot isn’t Minot without the Base Next: Bully Vigilance 22 →