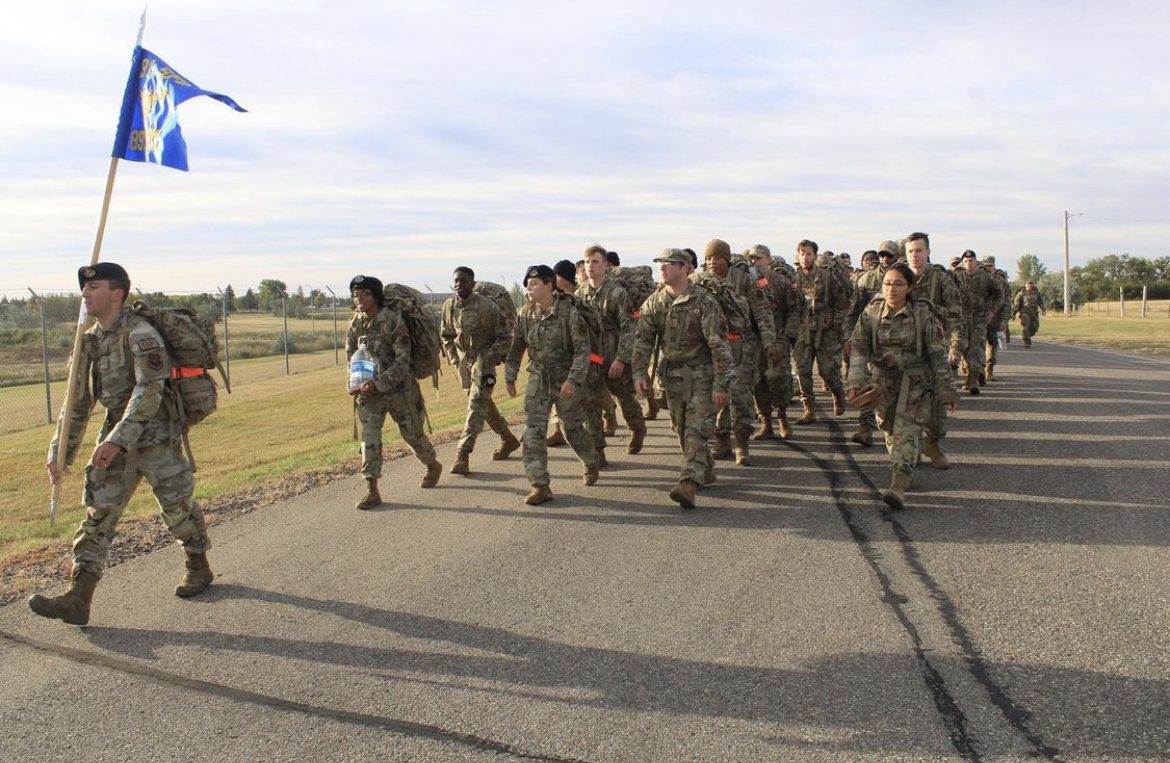 As September comes to a close and the summer sun fades into memory, some airmen have realized that September means more than the changing of season. September is recognized as National Suicide Prevention Month. On a sunny yet chilly early Thursday morning, September 22, the entire 240-person 891st Missile Security Forces Squadron (MSFS) ignored the call to sleep in and instead chose to ruck five kilometers, inspired by The Brave Badge Initiative. Suicide is a real, difficult and silent battle. It is also preventable.

The 891 MSFS (otherwise known as the Shadow Warriors) Commander, Maj. Chase Shields, told the Northern Sentry why this ruck was important to the unit, the base and to him personally. Last December, the Shadow Warriors lost an airman to suicide. Like any unit, they grieved for their friend, co-worker and fellow airman. In the aftermath of this tragedy, the squadron was contacted by The Brave Badge Initiative, a non-DOD organization that specializes in supporting Air Force Security Forces members. “This resource provides coping skills and support to Security Forces members struggling with mental health crisis, such as anxiety and depression, which can be caused by career field related or personal life stress.” Maj Shields said that this organization, along with military support systems, gave him and his unit the coping tools they needed and provided a wealth of information as the squadron went through that rough time. It was because of this connection that the 891 MSFS became aware of the challenge put out by The Brave Badge Initiative to host a run or ruck for the awareness of suicide prevention in the month of September. So, the Shadow Warriors took up the baton and orchestrated their own awareness event.

“Everyone battles things with life and carries their own burden. And a lot of times, it is invisible. But, at the end of the day, we’re all carrying something heavy. And that realization, in a way, provides people with the biggest protective factor in suicide. We are all part of the connective tissue which holds each other up and we are all in it together,” said Maj. Shields. This event was to remember those who have lost their battle to their mental health challenges, but most importantly, to bring awareness to those that may be struggling and educate them on what resources are available to support. The 891 marched the entire three plus miles in a road march formation while carrying 50-60 lbs. of gear in their rucksacks. It was done purposefully to represent the important bond of togetherness in both physical and mental purposes. “As we work together in line, at the same pace, we can look to our left, our right, behind or in front of us and see that everyone is carrying the same weight, and we are all moving at the same pace, together. We can all go through this life together.” Maj Shields and the rest of the unit were passionate about this event for two reasons.

← Prev: Everything You Need to Know about the Air Force Ball Next: A View from Our Side: Getting Ready for the “W” Word →