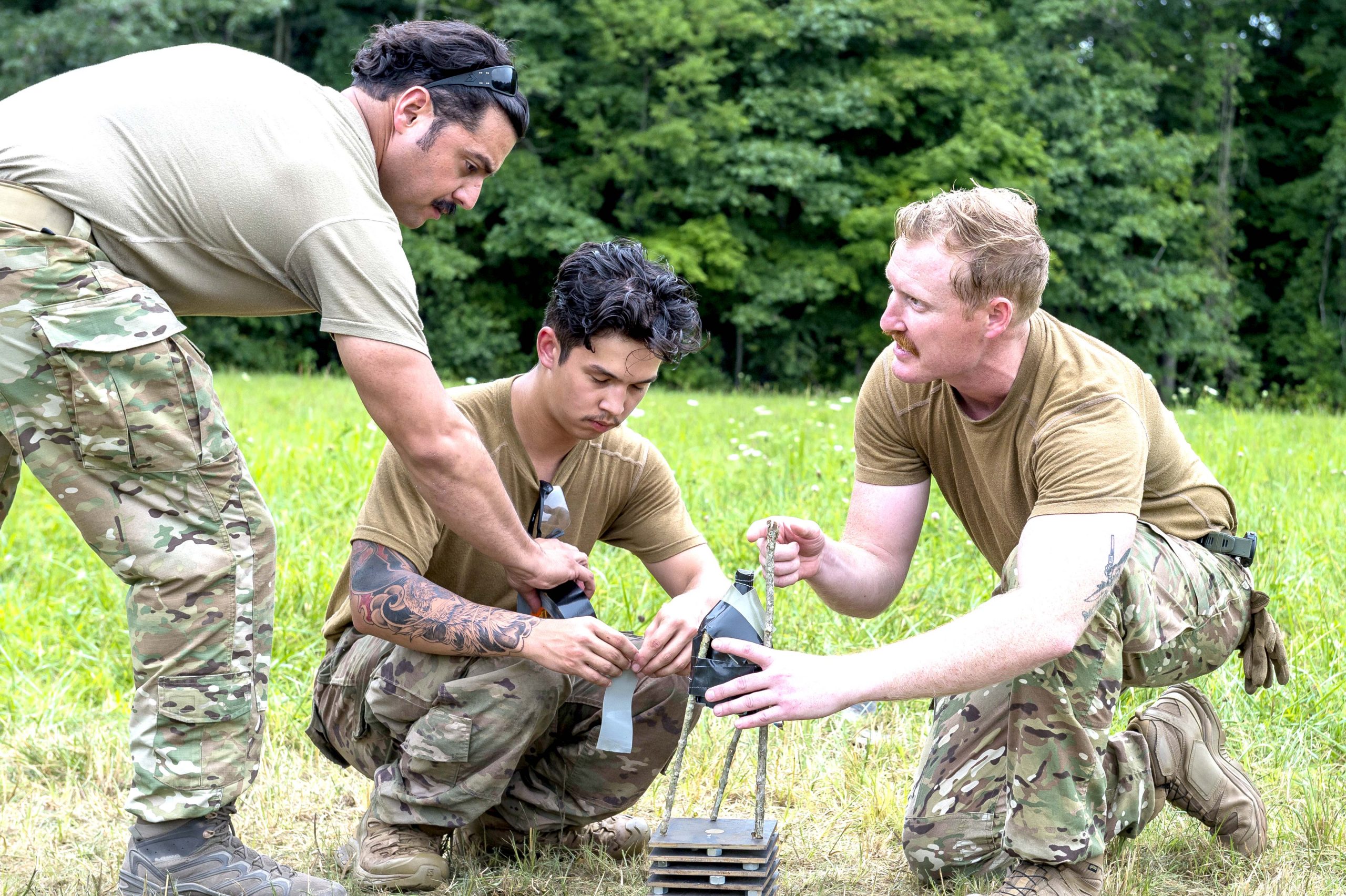 MUSCATATUCK URBAN TRAINING CENTER, Ind. – The winners of three competitive regional events designed to test and enhance the readiness capabilities of explosive ordnance disposal teams across the Air Force settled the score with Hill AFB earning the inaugural Air Force EOD National Team of the Year title this past week in Indiana.

“We were challenged with scenarios that were much more complex and advanced than those we faced at regionals,” said Tech. Sgt. Johnathan Page, Hill’s EOD team leader.

Holding the EOD championship event at Indiana’s Muscatatuck Urban Training Center placed competitors in “realistic, unfamiliar urban environments like those some of us have faced in the past, some of us are facing now and some of us will face in the future,” Page said. “Winning required thinking outside the box and a major reliance on the entire team working together, knowing not only our own jobs but each other’s. Our win was only possible because of the ingenuity and steadfast dedication of my team members.”

More than a year of planning at the Air Force Installation and Mission Support Center went into establishing the pilot program for competitive EOD events. With AFIMSC’s support, the program will expand to 10 events in 2023 – eight regionals, one AFGSC competition and a final national event.

“Our job at AFIMSC is to provide installation and mission support capabilities, which EOD technicians need to conduct their missions effectively,” said Master Sgt. John Johnson, resource analyst with AFIMSC’s Emergency Services Branch and event coordinator. “This competition allows us to do that by bringing in teams from across the Air Force to compete at one location, so we are able to get a first-hand view of our readiness levels, identify gaps and opportunities, and find better ways to serve the career field.”

“At the regional event, there were a lot of fundamentals tested. It was key that we were good at the fundamentals and had a good solid base. Here, it’s ramped up quite a bit. There is more detail in the planning and execution of the scenarios,” Tran said. “It’s very clear that they did a lot of research and work to put all these events together, but it’s great, it’s great to use our skills.”
“This was a full-spectrum competition covering eight of the nine Air Force EOD mission areas with scenarios that tested basic EOD skills like reconnaissance, x-ray diagnostics, robot maneuvering, explosive demolition and constructing protective works,” said Johnson. “These teams are the best of the best; they showed up and put their best skills on display. We saw a lot of critical thinking, creativity, ingenuity and everything you would expect to see from our best technicians. I’m excited for the future of this program.”

Johnson said the goal for next year is to include all active, Guard and Reserve EOD flights, and in subsequent years, expand it to U.S. Pacific Air Forces and U.S. Air Forces in Europe – Air Forces Africa commands.

“This is something we’ve been working on for a few years, so to have it coming to fruition here in this first-ever Air Force level EOD event is a big deal,” said Chief Master Sgt. Vandiver Hood, EOD career field manager at the Air Force Civil Engineer Readiness Division, Pentagon, Washington, D.C. “At headquarters Air Force, we’re always looking at how we can get a big picture look at the quality of training and preparation we are providing our EOD teams, and with events like this, AFIMSC is providing us with a clear view.”

← Prev: AADD…First Resort or Last Resort…Call! Next: What’s Going On in the BX? →