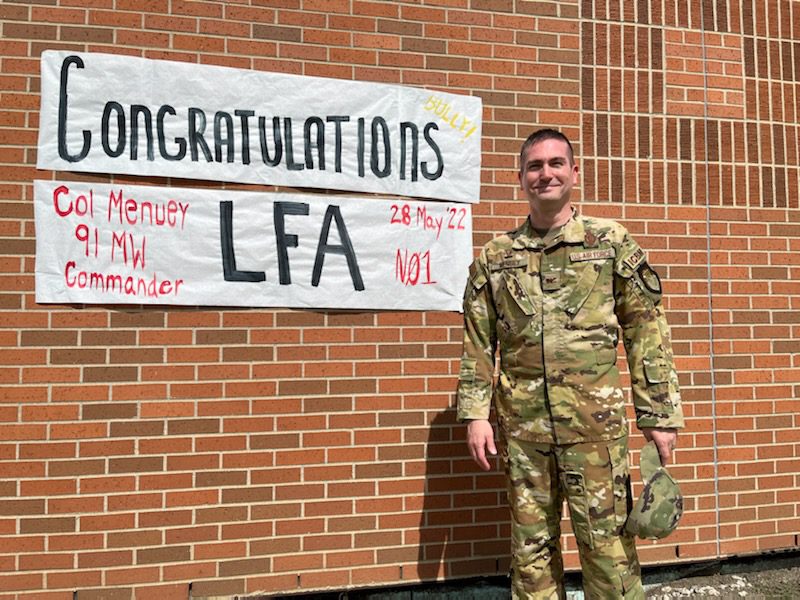 The UH-1N Huey helicopter announced its arrival long before it came into view. It was one of those perfect, blue sky days at Minot Air Force Base. The gathering waited for touchdown and the embarkment of Col Christopher Menuey on his fini helo flight, final helicopter flight for us civilians, as Commander of the 91st Missile Wing at Minot Air Force Base. In just a few short days Col Menuey will relinquish command of the 91st MW and head to his new assignment in Omaha, Nebraska.

Looking Back
A few thoughts entered my mind as we waited for Col Menuey’s arrival. First would be how short a time two years really is. In July of 2020 at the height of the pandemic, Col Menuey took command of the 91st. The ceremony was outside, and guests were limited. We struggled with the correct pronunciation of Col Menuey’s last name. I smile now as people in Minot still query me “how do you pronounce the Commander’s last name?” In August of 2020, we would have our first Military Affairs Committee meeting via Zoom as large public events, especially on Minot AFB, were either postponed, cancelled or moved to a virtual platform.
The Huey arrived and gracefully touched down. The scene was very cordial as Col Menuey shook hands and thanked members of the helo and ground crews as they surrounded the Huey. Everyone moved forward and a small, celebratory bottle of champagne was presented to Col Menuey. Indeed, one more event to check off in his final days as Commander of the 91st.
LFA- Last & Final Alert
Also checked off the list was Col Menuey’s LFA, or Last & Final Alert. This event would have been prior to the fini flight, taking place on the previous Friday and Saturday. Pulling an overnight alert seems fitting as more than likely Col Menuey will not be part of an actual missile wing administration again. There were photos and a small celebration as Col Menuey was welcomed back on Saturday by staff, family and friends.

Fini Flight
As we sat down to reflect on his two years at Minot AFB, Col Menuey talked about how beautiful the terrain was as they headed south towards Lake Sakakawea on his fini flight. Having a sailboat anchored on the north side of the lake, we shared experiences of locations like Goat Island, near Indian Hills Resort. Goat Island is a popular destination and anchorage for sailboats as they travel Northwest on the lake. I had heard the helicopter pilots referring to their trip over Goat Island (now because of lake levels more of a peninsula than an island) and how they were able to see many of the goats that inhabit the island. “We skirted along the lake shore for quite a ways,” according to Col Menuey. We were able to recount his morning flight on a map of the missile fields located on the wall of the 91 MW headquarters.
“Lasts” Sinking In
For Col Menuey, the busyness of leaving Minot and preparing for a new assignment has shielded him from the reality of the end of his tenure in Minot. “It really hasn’t been sinking in, but all of these lasts and final goodbyes and farewells are really making it hard,” said Col Menuey. “Now I am starting to think of all of the things I am going to miss. I am really going to miss the mission. I have been in the ICBM business for a lot of years.”

Community Ties
Col Menuey pointed out that he will also miss the community ties. “Everything from the civic leaders who have been great, to the programs that keep the base and Minot tied together, those are important and certainly will be missed.”

For all of us at the Northern Sentry who have had the privilege of meeting and getting to know the Menuey family, we want to wish them well as they travel to Omaha. It is kind of like going home for Col Menuey and Tonya, which is always nice. Oldest son Michael, a recent high school graduate, will be headed off to Bozeman, Montana, where he will enroll at Montana State University. After the change of command, which has already happened at the printing of this article, it is now time to fold up one list and open up another…”What to do when we arrive in Omaha?”