A Day for Minot Discovery 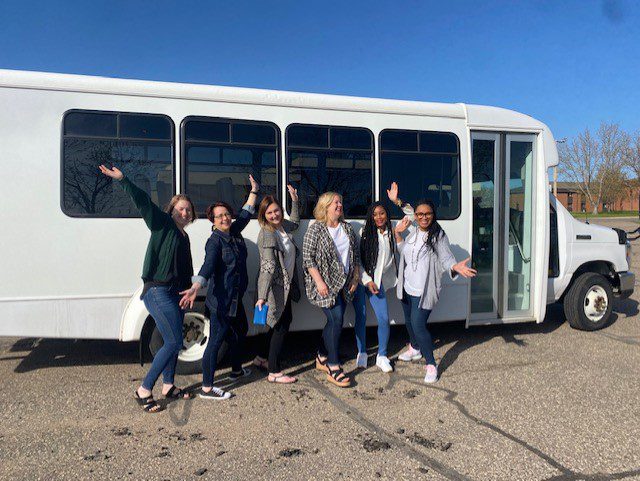 On Wednesday morning, May 25, a group of eager Minot AFB spouses boarded a bus and took off on a tour of a lifetime! Ok, maybe not a lifetime, but definitely one of the best tours for spouses while stationed at Minot. The tour, named Discover Minot Excursion, created and implemented by the Northern Sentry, was designed to create a partnership with the base and the city of Minot by creating an easy outlet for spouses to discover all the unique places and fun opportunities that may be difficult to find.

The day presented the beautiful Minot spring weather, with sunny skies and only a light breeze, while ten adventurous spouses started out on an excursion around town. First stop was the Woodland hiking trail and other difficult-to-find paths perfect for long walks with the dog or short nature exploration with kids. Speaking of kids, the bus then drove to the somewhat-hidden Wee Links Golf Course. This non-profit organization boasts a golf course and rentals (at amazing prices) for kids and adults alike. The tour also showed spouses how to get to the Souris Valley Golf course- where a sledding hill is located during the winter months- and the Maysa Arena, the local hockey and skating hub. After a quick stop at the Scandinavian Heritage Park, and some awesome SWAG later, the tour bus hopped on over to the North Dakota Fairgrounds, and the exciting building site of the much-anticipated Magic City Discovery Center. It was here that the spouses were greeted by Wendy Keller, the Executive Director for the center, whose passion for the project exuded in her excited demeanor. Keller explained the history of the project, when it will be opening (Fall 2022) and what can be expected. Hint: the Discovery Center will be a hybrid mix of a children’s museum and science museum. Keller told spouses that the project has been in the works since 2013 and has been a perfect example of the community working together. Millions of dollars in both public and private funds have been donated to create this amazing new concept for Minot. The Discovery Center will allow North Dakota to no longer be the only state in the U.S without a major Children’s Museum. Another particularly adorable highlight of the tour was the beloved Roosevelt Park Zoo where spouses got a special behind-the-scenes glimpse of the workings of the zoo as well as the cute baby tiger cubs!

The exploration wrapped up with a delicious lunch and a mouthwatering cookie from “Cookies for You” in downtown Minot. Some boutique shopping on Main Street and peeks into the unique shops then lead the spouses to downtown destination of Gourmet Chef. Here the tour goers were presented with a full complimentary olive oil and vinegar tasting. The KX News Minot station even surprised the spouses and showed up to cover the unique event on their news program. Spouse Carri Walters was interviewed on camera to represent the unique opportunity of the Discover Minot Excursion. Carri later told the Northern Sentry that the Discover Minot Excursion was, “…a wonderful way for military members and spouses to get to know Minot and all that it has to offer. And a great way for spouses to meet each other!”

As the afternoon ended, the spouses, full and happy, made their way back to the bus for the serene ride back to Minot AFB. Spouse Kelly Blankenhagen, who was actually on her last day in Minot before her family PCSs said, “The spouse tour was a day well-spent. I learned about both new and existing offerings in the community. The baby tigers were the cutest and I can’t wait to take my family to the new discovery center when it opens. I’d highly recommend the tour to anyone-Minot newbies or even seasoned residents. The lunch was great and I’ve already used my downtown gift card!” Kelly mentioned that she wished this tour would have been offered when she first arrived here but that it was a perfect way to say her goodbyes to the city of Minot which she had called home for the last two years.

The first of many to come, Discover Minot Excursions was a fun-filled learning experience. The Northern Sentry plans to offer more and even better excursions in the future with one tentatively set for late summer, likely September 14. And an extra special evening Excursion to highlight the holiday lights in downtown Minot set for November 30. These tours are open to all adult MAFB personnel, active duty and dependents, so make sure and sign up quickly for the next Discover Minot Excursion!