Wing Command Spouses-
Perspectives from the Best
(Who Have Come North) 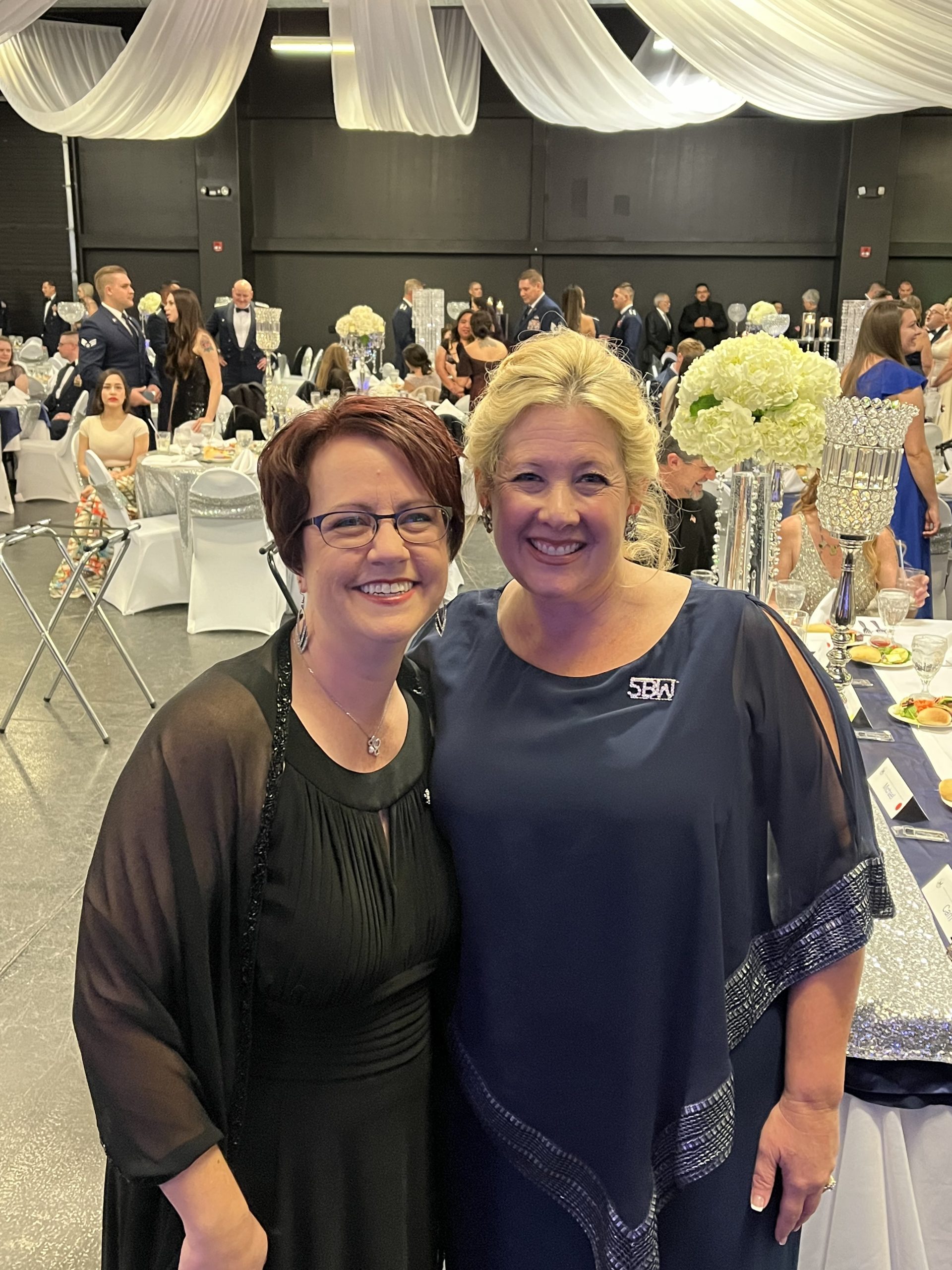 Tonya Menuey and Carri Walters at the Air Force Ball 2021.

While Command spouses are not obligated to be involved in the community, building and sustaining a strong relationship with the local community is critical to our mission success and the health and welfare of our force and families. Both Carri and Tonya recognized the importance of their roles and responsibilities with our community partners, and have gone above and beyond in fostering that connection. Their efforts have directly impacted the wellbeing of our Airmen and families, allowing them to effectively carry out the mission day-in and
day-out.

Just as Tonya and Carri support our missions, we support theirs. They take care of our families at home and still have such a huge capacity to care for Team Minot as well. They have such big hearts for helping Airmen and families and continuously pursued helping Airmen, spouses and families feel supported, loved and valued.

It’s that time again. The time when the new wing commanders come in and the farewells to the seasoned commanders kicks off. It is a time of remembrance and the familiar “starting new” vibe that the military offers frequently. While every base experiences this, the unique combination of the Bomb Wing and the Missile Wing here at Minot create an atmosphere almost unknown to any other part of the Air Force. The commanders that come in every two years must work side by side, yet handle completely different missions. Col. Michael Walters and Col. Christpoher Menuey have worked hard and created a partnership between the two wings that will continue to grow. However, this article is not about their hard work and ingenuity, though very esteemed. It is about something else. It is about two people who work behind the scenes. Two people who are unofficially given a military role. People who rise to unspoken expectations and do so with grace, humility and a smile. Of course, this article will highlight the two wing command spouses who create the “Wing Command Teams” here at Minot AFB.

Mrs. Carri Walters, 5th Bomb Wing Command Spouse, and Mrs. Tonya Menuey, 91st Missile Wing Command Spouse, have worked to unite the wings in friendship and partnership. Both women said they preferred to be called by their first names, so before getting into exactly how these two remarkable women have strengthened the base these past few years and what they have accomplished, it is important to understand the role they have as wing command spouses and what that role means. So what does it mean? What does a Wing Command Spouse do? When asked to define the sometimes elusive role, Tonya said, “ … [ a command spouse] is just a person who has zero power but can have influence, help make things happen and help effect change. People sometimes have this idea that a Wing Command Spouse needs to act a certain way—and obviously there are times that a certain protocol is needed—or that we have it all together, but do you know how many times I did something ‘wrong’ at an event over the last two years!? I am pretty clumsy so it may have been that I tripped or I didn’t wear the ‘right’ clothes, or I said something awkwardly. I have learned to laugh at myself in those situations and I remind myself that the more ‘real’ I am, the more it puts others at ease.” Carri added that a command spouse is a part of the larger command team that can help ‘cover blinspots’ and can sometimes help the base see perspectives that aren’t always evident to active duty members.

Both women described their role with humility and refreshing honesty. With an ever-evolving military, Carri and Tonya candidly admitted that they are just like all mil spouses and have highs and lows. They both wish to show that they are living the same life as all military spouses, yet have simply been doing it for a while. Both even have some regrets and things they wished they had done differently. When asked, Carri mentioned that she wished she had taken photos of all their military houses over the years as it represents a part of her life that was beautiful, even though temporary. Tonya mentioned that even she had “pity parties” a time or two when something in the military didn’t go right, but she now knows that it didn’t change anything and once she got her attitude together, everything worked out for the best. Drawing from her faith she mentioned, “God is Faithful,” and both Carri and Tonya wholeheartedly agreed that no matter what the hardship, tough PCS or unplanned deployment: It always gets easier and better.
Since both Carri and Tonya entered into the Wing Command Spouse role in the height of the pandemic in Summer 2020, they admitted that they sadly missed out on a lot of social opportunities and it took much longer for both of them to get to know other spouses. While most of the Covid-19 downsides were unavoidable, both ladies were somewhat surprised about how and what events evolved from the pandemic. Tonya mentioned that she was impressed to find that the events that mattered survived, whereas some of the superfluous things didn’t, and that wasn’t always a bad thing. Change can be a good thing, and some of the issues discovered during Covid helped recover a better atmosphere. Speaking of restrictions and being trapped in the house, this reporter asked both women what behavior or technique have they learned at Minot that has changed their life for the better. Carri said, “Instead of feeling restless by being shut indoors – [ I ] embrace the time that has to be spent indoors and practice spending my days in meaningful ways without leaving the house.” Tonya replied with, “ We made Saturdays very simple. It has been rare for our family to do anything on Saturdays and even Sundays. It was our time to recharge. We probably missed out on some opportunities to get together with people, but it was what we needed—we needed the time together to be ready for the week and all its demands.”

In a unique position to share the wing command spouse role on the base, both Carri and Tonya recognized they had similar goals but different personalities, and they were able to create a harmonized team by utilizing their individual strengths. Both women wanted to cultivate unity among the wings, spouses and base. Because of these aligned purposes, these women have been able to inspire spouses and the entirety of the base for the better. One of their most proud and purposeful joint base accomplishments was orchestrating the recurring event, “Spouse Welcome on the Road: Base Tour” with the Airmen and Family Readiness Center. This tour introduces new or seasoned spouses a glimpse of Minot AFB facilities, as well as introductions from the wing commanders themselves, with a free lunch and childcare included! While this program technically existed before both Tonya and Carri came around, these two have worked hard to make it better, more informative and more well-known into the fabulous event that is it today. The next tour kicks off in August after the herd of summer PCS families.
In order to portray these women as they really are – once ordinary military spouses that have influenced so many on this base – this reporter reached out to a few other spouses around the base to let their accomplishments speak through the words of others. 91 MW spouse Lauren Shields said about Tonya Menuey, “I was fortunate enough to have met Tonya a decade ago at FE Warren and can tell you, in a leadership position or not, Tonya radiates goodness in everything she does and has a genuineness about her. She is invested in making sure the spouses and their families have a positive experience with the leadership and with Minot AFB in general. She has always taken the time to answer questions, listen, give advice or just bounce ideas off of. You will leave a conversation with her feeling uplifted!” 5th Bomb Wing Spouse Tracey Dixon exclaimed about Carri saying, “I truly admire my friend Carri for her poise, grace and her smile…even when she has a hundred things going on all at the same time. When you talk with Carri, she gives you her full attention and the feeling that nothing else matters in the moment but you. Carri is also very passionate about caring for our Airmen and their families. I believe she has done a wonderful job for the ‘Minot Family’ over the past two years. She will be dearly missed as the Walters family moves on to their next adventure.”

During a very heartfelt and touching interview with both spouses, this interviewer uncovered some raw and honest comments about what these last two years have meant to them and how their roles as mentors to AF spouses affects their daily lives. After much life experience and the wisdom that comes with lots of hands-on learning, they would like to leave Minot AFB with some last insightful thoughts to offer spouses. Carri said, “Don’t live your military life perched – feeling temporary and waiting for the next move. Make each place a home…hang pictures, make friends, get involved with your community. Twenty years goes by surprisingly fast. And what we have at the end will be the friendships we made, pride in the commitment and sacrifice we made to our country, the memories of the experiences we had and the people we met along the way. Dive in!!” Tonya mentioned, “Be yourself no matter where you go or what your Active Duty spouse does or what rank they are.”
Speaking from myself, many of the members of the Minot AFB spouse community, and the base in whole, thank you both for what you have offered this base in terms of support, outreach, care and personability! You will both be missed incredibly and we appreciate your dedication to this base, your role as a mil spouse and to the success of the military community as a whole. Good luck in your future endeavors and we’ll see you around the Air Force!

← Prev: Family Child Care<br>Celebrates Month of the Military Child Next: John Sinn<br>A Man Who Served His<br>Country and His Community →