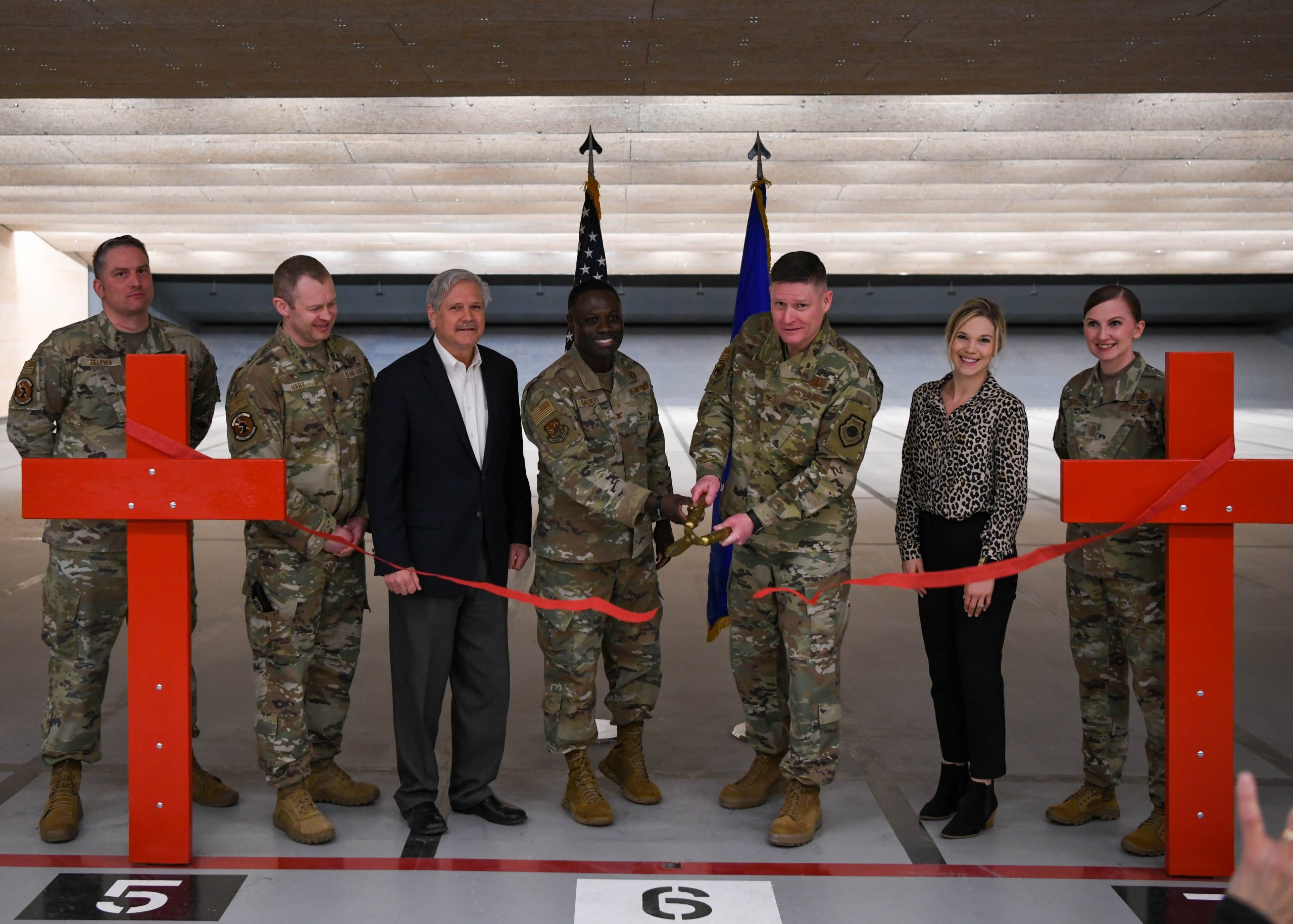 Minot Air Force Base leadership and North Dakota elected officials cut the opening ribbon for the combat arms range at Minot Air Force Base, N.D., April 22, 2022. Approved in the Fiscal Year 2018 Military Construction budget, the new facility enables year-round use regardless of weather conditions. The previous facility, constructed in 1984, was primarily outdoors and did not offer Airmen a training environment out of the North Dakota winter weather. U.S. Air Force Photo I Airman 1st Class Evan J. Lichtenhan

MINOT AIR FORCE BASE, N.D. —
On April 22, 2022, Minot Air Force Base leadership, Sen. John Hoeven, the Mayor of Minot, Shaun Sipma, and multiple other distinguished individuals attended the official opening of the new, fully indoor, combat arms range at Minot Air Force Base.
Minot Air Force Base is home to over 1,000 first-term security forces Airmen requiring certification on a variety of different firearms, to accomplish the Air Force Global Strike Command mission. Prior to the construction of the new $27 million range the only option for Airmen to qualify on firearms and other munitions at Minot Air Force Base was an indoor-outdoor range constructed in 1984. Due to the significant weather in North Dakota the conditions were less than optimal during winter months.
Since the new Minot AFB indoor Combat Arms Training and Maintenance (CATM) facility opened on Nov. 21, 2021, the Airmen who manage the training program have continuously conducted certifications, in spite of one of the coldest winters on record, ensuring year-round security readiness.
“The weather in Minot North Dakota is pretty notorious,” said Technical Sgt. William Delphia, noncommissioned officer in charge of Combat Arms. “We have just under 200 days per year that are subfreezing temperatures. Having a completely indoor facility allows us to fire more often. With our old facility being partially outdoors, we would have an average of 20 classes cancelled annually.”
With Minot AFB hosting two nuclear-capable wings, the base CATM facility ranks as the third busiest range in the Air Force, with trainers overseeing over 9,000 qualifications a year.
Approved in the Fiscal Year 2018 Military Construction budget, construction on the new 49,000 square foot firing range began August 28, 2019 and houses 35 small arms as well as four heavy arms firing lanes.
Additionally, all ranges have floor, radiant, and air unit heat, ensuring a training environment available year-round.
“We took five facilities and combined them into one self-sufficient facility,” said Delphia. “We have three ranges currently, we have a 14 point range, a 21 point range, which are both small arms ranges used for pistol, rifle and shotgun. And then we have a four point machine gun range which is used for our defenders and EOD techs to qualify on various machine guns.”