Global Strike this past week: Capability, professionalism and boldness 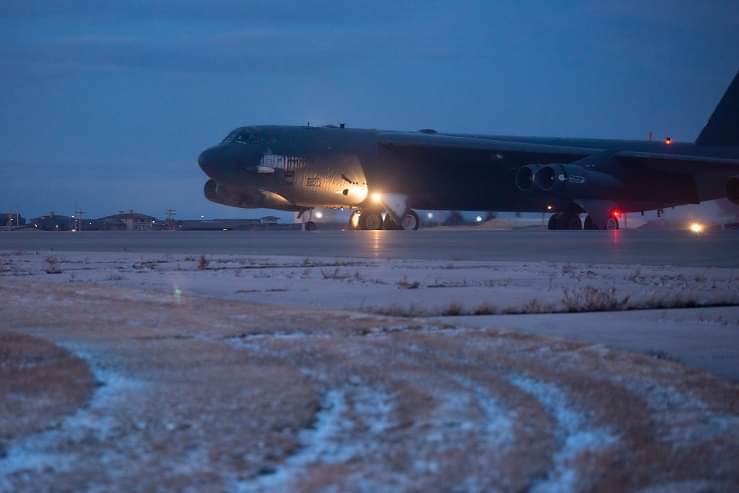 BARKSDALE AIR FORCE BASE, La. —
The men and women of Air Force Global Strike Command have not only had a busy week, but have repeatedly showcased the importance of rapid deployment to conduct combat operations.
During the past week, AFGSC, in coordination with U.S. Strategic Command, U.S. European Command and U.S. Central Command, executed two bomber deployments in three different combatant command areas of operation, as well as hosted the first official trip of the Secretary of the Air Force at F.E. Warren Air Force Base, Wyoming.
On Oct. 24th, multiple B-1B Lancers launched from Ellsworth AFB, South Dakota, as part of Bomber Task Force operations in the CENTCOM AOR. The B-1s returned home after a mission that reached across the globe from South Dakota to Prince Sultan Air Base, Saudi Arabia and back. This unannounced arrival demonstrated the ability of AFGSC to rapidly deploy and conduct combat operations anywhere, anytime to provide lethal precision-strike options for combatant commanders.
This rapid deployment was executed while the command was also participating in Exercise Global Thunder 20, USSTRATCOM’s annual nuclear command and control and field training exercise.
As part of GT20, a BTF mission involving B-52 Stratofortress and B-2 Spirit aircraft took place Oct. 27 to28 to train AFGSC forces, assess joint operational readiness, and integrate with a full complement of U.S. and key allied aircraft. The aircraft departed from multiple locations in the United States and conducted training operations in the European theater. Upon completion of their training, the bombers returned to their home bases at Minot AFB, North Dakota, and Whiteman AFB, Missouri.
Incorporating this BTF mission into a global exercise enhances U.S. integration with allies, and improves overall readiness of the U.S. nuclear deterrent.
“I’m extremely proud of the work our team continues to accomplish every day on behalf of the nation,” stated Gen. Tim Ray, AFGSC, Air Forces Strategic-Air and joint force air component commander. “We demonstrated our capability, professionalism and boldness these past few weeks with the flawless execution of Global Thunder, unannounced B-1 deployments to Saudi Arabia, ICBMs and nuclear command, control and communications at the ready, and also supported the Secretary of the Air Force’s first base visit. We sent a bold signal to the world—We are Strikers!”
As the JFACC for USSTRATCOM, Ray is responsible for all air assets within the USSTRATCOM joint force. The USSTRATCOM JFACC conducts kinetic (nuclear and conventional) and non-kinetic effects planning and execution, while managing global force air activities to assure allies and to deter and dissuade actions detrimental to the United States and its global interests.
“Global operations are not possible without the tremendous work of our entire team, from the maintainers, loggies, comms, ammo, fuels, defenders and many, many more–our crews could not do this without your amazing dedication,” Ray said.
On Oct. 27, the command also hosted Secretary of the Air Force Barbara Barrett at F.E. Warren AFB as she made her first official visit as the 25th Secretary of the Air Force. Barrett visited various facilities on base to gain a better understanding of the pivotal nuclear mission that defends the U.S. and its allies.
“I saw the precision and care of day-to-day operations across the wing,” said Barrett. “Everyone takes pride in operating, maintaining and supporting the nuclear enterprise in a safe, secure and effective manner.”
During a tour of U-01, Barrett descended into the missile silo, gathering perspective into the missile maintainer’s job, the vastness of the ICBM and the equipment used to keep the mission operational.
“Our command and Airmen are strong. Our commitment to our Joint Team and our allies and partners is strong. No other nation on earth can do what you do every day; you make it look easy, but I know it is not. Certare Vel Mori!” said Ray.
Additionally, AFGSC currently has bombers and personnel deployed to the U.S. Indo-Pacific Command and U.S. European Command AORs.