Barrett publicly sworn in as secretary of the Air Force 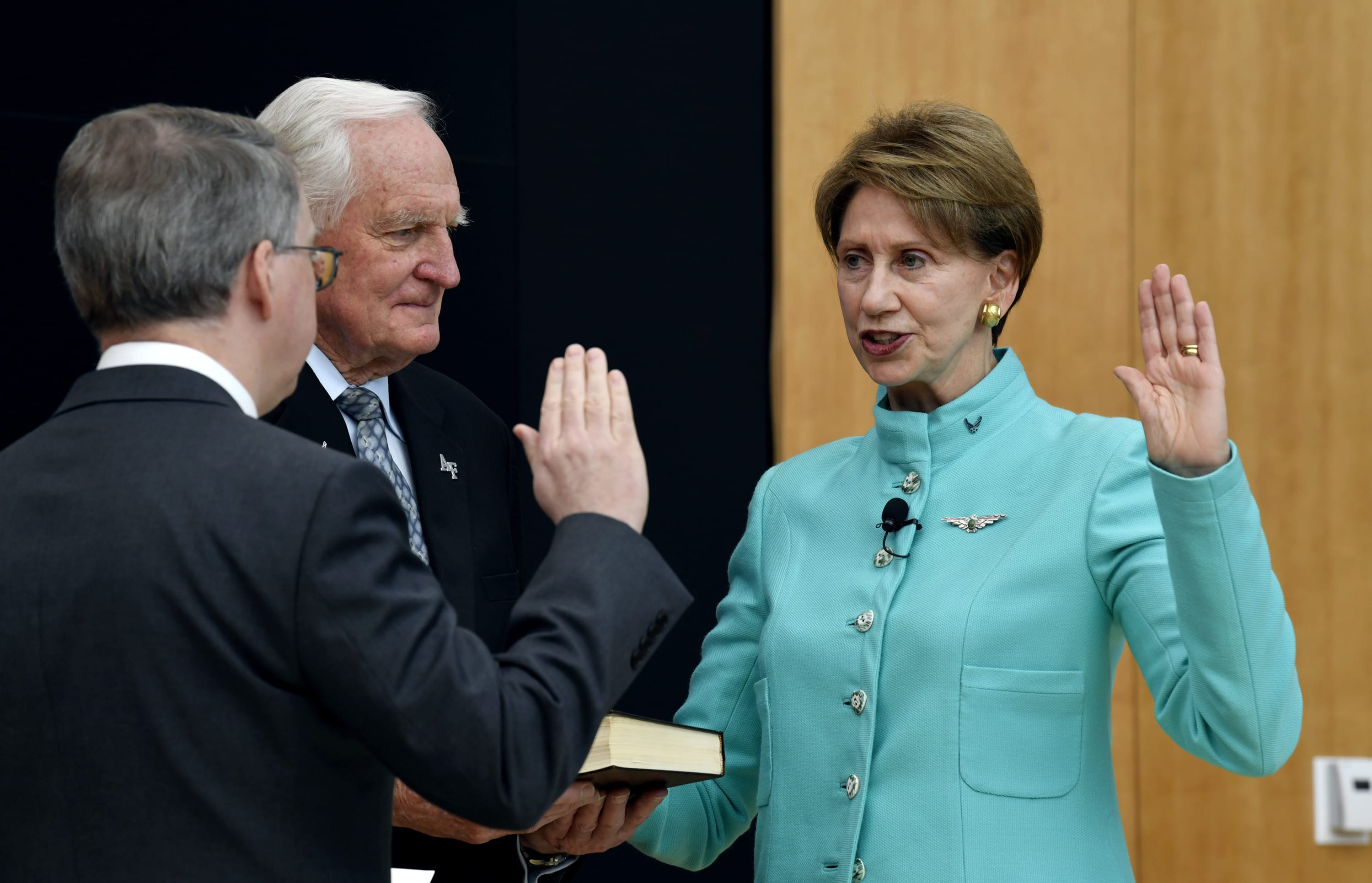 David L. Norquist, deputy secretary of defense, left, administers the oath of office for Secretary of the Air Force Barbara M. Barrett during her ceremonial swearing-in at the U.S. Air Force Academy, Colorado Springs, Colo., Nov. 2, 2019. Barrett will be responsible for organizing, training and equipping 685,000 active-duty, Guard, Reserve and civilian Airmen, as well as managing a $205 billion budget. Holding the Bible to her right is her husband of 34 years, Dr. Craig R. Barrett. U.S. Air Force photo Wayne Clark

ARLINGTON, Va. (AFNS) —
Barbara M. Barrett was publicly sworn in Nov. 2 as the 25th Secretary of the Air Force at the symbolically potent U.S. Air Force Academy, Colorado Springs, Colorado, using the high-profile location to salute the service’s history and potential as it positions itself to meet future challenges.
David Norquist, deputy secretary of defense, conducted the public swearing-in, which preceded Barrett’s first formal remarks since becoming the secretary. Barrett said her highest priority is protecting – and prolonging – the Air Force’s unrivaled excellence.
“The men and women of the United States Air Force have earned the confidence of our nation. We know that it is ready, resilient and capable of defending America,” Barrett said in her remarks.
Norquist, Air Force Chief of Staff Gen. David L. Goldfein, Chief Master Sgt. of the Air Force Kaleth O. Wright, other senior officials, family and friends joined Barrett. In separate remarks, Norquist both highlighted Barrett’s background and experience and reinforced her focus on confronting new threats, adapting to an era of “great power competition” and fulfilling requirements outlined in the National Defense Strategy.
“For the Air Force, that means maintaining our air superiority and making greater investments in the modernization of our conventional and nuclear forces,” Norquist said. “It means assembling the best minds in space and cyber to address our vulnerabilities and lead the way in these new warfighting domains.”
Barrett, Norquist added, “is, without question, the most competent person to take on each of these challenges and lead our Airmen with the integrity and diligence that has enabled the Air Force to dominate the skies.”
Adapting to the new reality and succeeding means pushing hard to continue modernizing the force while continuing the “superb flight plan for the Air Force’s future path” conjured by her predecessor, Dr. Heather Wilson, Barrett said. Wilson was also in attendance for the ceremony.
Achieving that means holding fast to Air Force core values and ensuring those values serve as a compass guiding the service forward.
“The United States Air Force is enduringly guided by its core values, its Polaris,” she said. “Integrity first, service before self and excellence in all we do. These unchanging values represent our Polaris.
“And guided by the core values, the United States Air Force is the best in the world at what we do: defending our nation in air, in space and in cyberspace.”
At a time of stresses to mental health and concerns about suicide across the Air Force, it means focusing on the needs, health and fulfillment of “our greatest asset,” the Air Force’s Total Force personnel, she said.
“The Airmen who wear our nation’s uniform are our greatest asset and treasure. We have no greater charge than to develop and care for them and their families,” she said.
Barrett, who was administratively sworn in Oct. 18 at the Pentagon, said the U.S. Air Force Academy was intentionally selected as the location for her ceremonial swearing-in and her first extended public remarks.
“It is not by accident that we gather at Polaris Hall, at the Academy, for this ceremony instead of the steps at the Pentagon,” Barrett said.
“Here at this venerable institution, entrusted to mold future leaders of the United States Air Force, is a monument to character and leadership, the oculus, above us, points directly to Polaris, the North Star… true north.
The location of the speech – Polaris Hall in the Academy’s Center for Character of Leadership Development – also reinforced Barrett’s emphasis on ethics and integrity.

Storm Spotter Program
SKYWARN® to be held at Minot AFB

In most years, thunderstorms, tornadoes and lightning cause hundreds of injuries and deaths and billions in property and crop damages. To obtain critical weather information, the National Weather Service (NWS) established SKYWARN® with partner organizations. SKYWARN®... 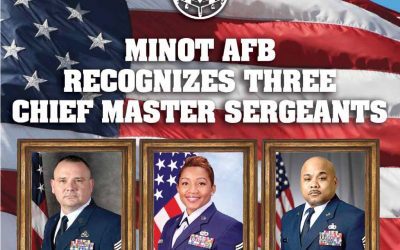 A native of Union City, Tennessee, Chief Master Sgt. Whitney S. Rogers has been in the Air Force for 17 years, following right in her father’s footsteps. “He was in the Air Force, and so I wanted to go to the Air Force,” shares Rogers. “To be honest, I joined the... 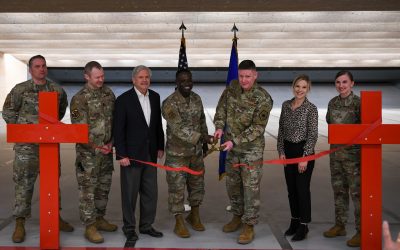