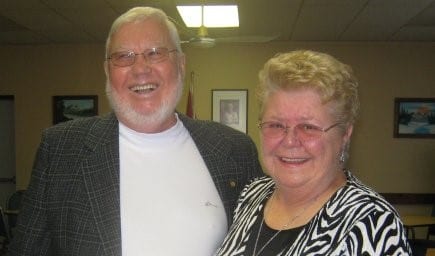 Bryan and Barb Cook only made it to Norsk Høstfest once, but the positive impact it had on them lasted a lifetime and inspired their daughter, Laurie Appel of Esterhazy, Sask., Canada, to buy tickets to this year’s Scandinavian festival in their memory.

“They went to Høstfest about 15 years ago,” Laurie said. “They wanted to go more, but their health just didn’t allow it.”

Barb Cook died four years ago. Bryan Cook died this summer in June. They would often talk about their Høstfest experience and, when Bryan was dying of cancer, Laurie told him that she and her husband, Ernie, would go to Høstfest in Minot, ND, someday. “He said, ‘You should! You absolutely should’,” Laurie recalled.

So, Laurie and Ernie bought Høstfest tickets this summer with some of the money that was left to them by her parents. Norsk Høstfest — known as North America’s largest Scandinavian festival — is held September 25-28 at the ND State Fair Center in Minot. Ernie will be wearing a button Bryan purchased at Høstfest that says “Help me, my wife is Norwegian!” It was a button with fond memories as Barb was of Norwegian heritage and Bryan was English.

Laurie will remember her mother, as she does every day, each time she looks at the “uffda” tattoo she got shortly after her mother’s death. Family members heard Barb say it so often that they chose to begin her funeral eulogy with the word “uffda”.

Barb was a wonderful lefse maker, Laurie said. Laurie and Ernie’s son has the recipe and made a batch, “but he said it’s not up to ‘grandma’s standard’.”

“I love lefse,” Laurie said. “That could be a meal! I could just eat that.”

She and Ernie plan on eating more than lefse at Høstfest, though. “We like to try new stuff and eat the traditional foods,” she said.

They will dine at En To Tre, the festival’s fine dining restaurant headed by world-class chefs who fly in from Norway and serves a six-course meal of Nordic cuisine. Food from Scandi, another restaurant operated by a team of chefs from Norway, is also on their must-eat list.

Laurie is hoping to find someone at Høstfest who can look at a book her grandmother (Barb’s mother) had as a child. “It’s quite old.” She wants someone to read it “just to see if it’s Norwegian, or if I’m out to lunch!” she said with a laugh.

Ernie and Laurie look forward to seeing the Høstfest amenities Barb and Bryan talked so much about. “They kept going on about the entertainment. They really enjoyed the entertainment! They used to dance every weekend, so any kind of socializing – they loved that.”

The four-day festival features seven general admission stages with hundreds of performances happening daily along with a Great Hall of the Vikings concert occurring twice-a-day. In addition to music, guests can find a Nordic Kitchen where Scandinavian chefs teach cooking classes and a live-action Viking Village that features authentic Viking activities and battle reenactments. An entire wing is dedicated to Artisans who showcase traditional Nordic crafts; while throughout the complex shopping and dining options can almost overwhelm the senses.

Laurie said Barb and Bryan mentioned how “everything was just so organized. They were really impressed with that.”

Laurie experienced that organization first-hand when she ordered their Høstfest tickets online. She purchased tickets for all of the days, bus passes and more.

“All we have to do is get to our hotel and catch a bus” which will bring them effortlessly to Høstfest each morning and take them back again at night. “I love that you could buy everything online. It was all very user friendly,” Laurie said.

Laurie is retired but Ernie is taking time off of work at the Mosaic Company potash mining facility to attend Høstfest. They come to Minot often for shopping and to fly out of the Minot International Airport to various locations. They haven’t gone to Norway yet but they traveled to Italy, where Laurie and Ernie ran a half-marathon (21 kilometers or about 13 miles). Laurie will have completed 22 half-marathons by the time she arrives at Høstfest and Ernie will have 8 or 9 under his belt. “We have another one in November, so walking at Høstfest will be good,” Laurie said. That one is in Las Vegas.

Laurie once ran a half-marathon in Esterhazy in the winter. “I won’t make that mistake again,” she said. The temperature? Around minus 30 degrees Celsius (which is about minus 22 Fahrenheit). “It was really cold!”

She won’t experience that when she arrives in Minot. History shows temperatures should range from about 40 to 70 degrees Fahrenheit during Høstfest.