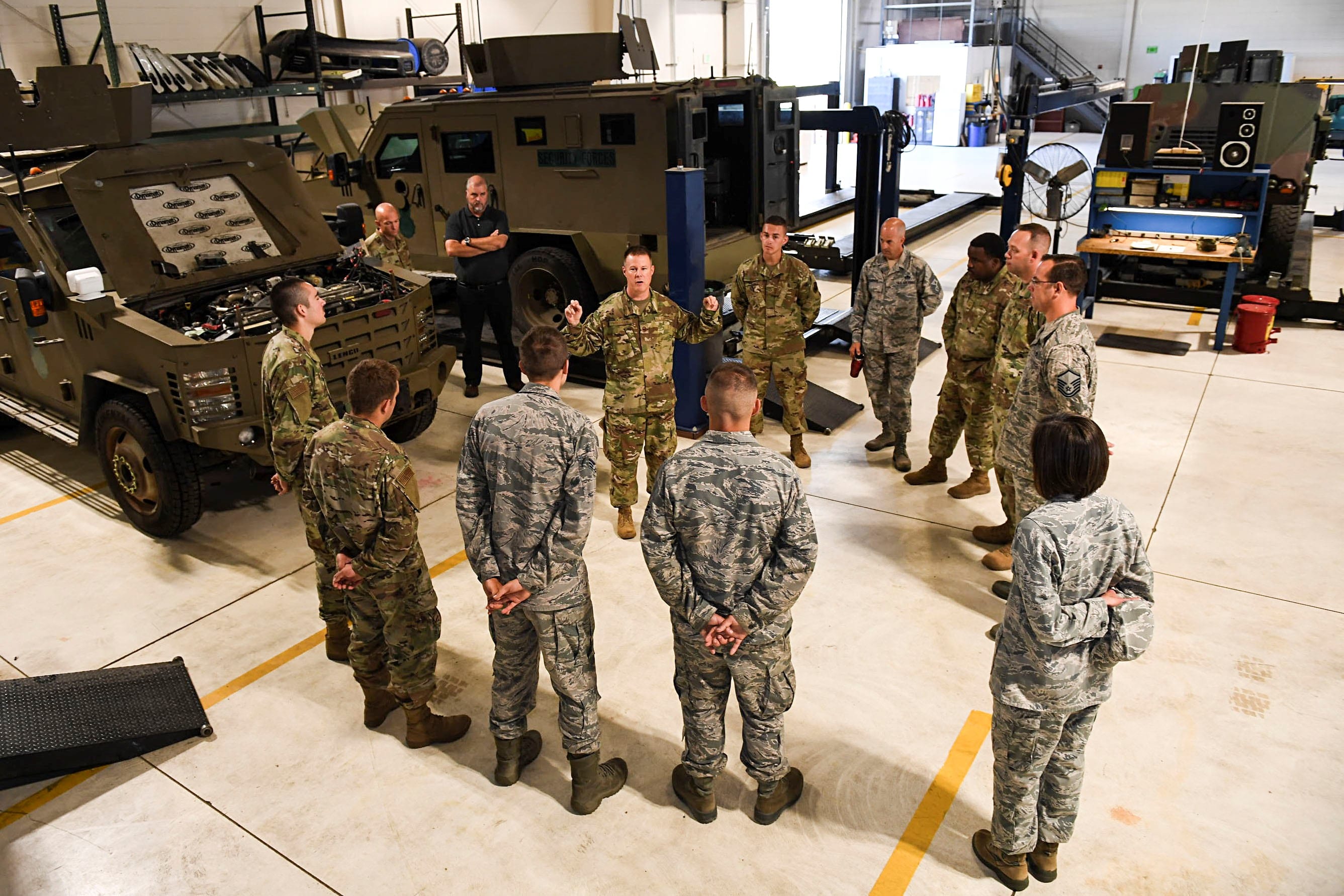 It was a hot July day when Tech. Sgt. Hoffman collapsed from exhaustion in front of the Chapel. After a month of no sleep and losing 30 pounds, he knew he needed to talk to someone.

Hoffman, having never been to Minot, wanted to get the full experience the base had to offer while sharing his advice with Airmen and hearing what they had to say. Hoffman visited places such as the 5th Security Forces Squadron at 4:30 a.m. and the 91st Power, Refrigeration and Electrical Laboratory battery shop in an effort to focus on learning about Airmen’s mindset, their training, and just what Team Minot is all about.

A big part of every Airmen’s training is the ability to come face to face with obstacles in their daily lives, albeit work or personal, and overcome them. Some however find this a daunting task.

“Everyone is carrying a burden,” wrote Hoffman in an email. “That’s not unusual. It’s normal. I also learned that this family will surround you when you need them.”

Receiving orders to Minot is often tied with a stigma: its cold, in the middle of nowhere, and you’ll be here for a while.

“Every assignment has been valuable and I learned something I’ve used later,” said Hoffman. “Some of the worst times become some of your fondest memories. How you feel about it is the result of making lemonade out of lemons…and it starts with you.”

This stigma has led to Airmen occasionally refusing orders to Minot. However, the implementation of Code 50 at Minot helps grant reprieve.

Code 50 is a stipulation placed on an Airman’s assignment limiting their time on station, usually to about four years.

“It is an opportunity to learn the skills necessary to defend our missile fields and then be allowed to PCS (permanent change of station) and share that knowledge in other parts of our Air Force,” said Hoffman.

The prospect for leaving Minot was out of reach for some, but now Code 50 provides that path. Hoffman, while out at the missile alert and launch facilities, had the opportunity to mentor his fellow Airmen on overcoming their own obstacles.

“Seek the help you need, I did,” said Hoffman. “I am a product of seeking mental health after a significant life event as a technical sergeant; those were some dark days. I came out stronger than ever but it took a lot of work.”

Hoffman said that after collapsing on that hot July day, he picked up an emergency phone and was talking with a chaplain within 30 minutes.

“What I remember most is that the conversation had zero to do with religion and everything to do about my situation,” said Hoffman. “He told me that I had packed 100 pounds of burden in a 20 pound ruck, and he was there to share the burden. ‘Take a few things out,’ he said.”

Hoffman said that he started exercises with a captain from mental health to get through his situation.

“I remember the day I woke up. I finally started eating and sleeping again! And I could see a better future,” said Hoffman. “I told my mental health captain that week…and we were done.”

Exercising is a valuable tool in combating stresses and is often a way to work through burdens that plague the minds of Airmen. Hoffman learned that value as well by taking up yoga and learning the importance of down time.

“I gained a lot of empathy and understanding and have tried to pay it forward ever since,” said Hoffman.

Trust is built moment by moment, an Airmen’s focus should be to return to duty when able, said Hoffman. From the AFGSC level to base leaders, they all share the same mission and focus: for Airmen to be authentic and care about each other.

“There is nothing more important than what you do in your life,” said Langston. “This mission will continue on while you take a knee and get help.”

While visiting the LF, Hoffman was able to witness an essential job of the 91st MW Airmen who provide a vital role in the mission of global deterrence: assembling and maintaining an intercontinental ballistic missile.

“The efficient work of our 91st Maintenance Group maintainers is unique and gives them a sense of pride,” said Chief Master Sgt. Brian Arbegast, 91st MXG superintendent. “In their job of maintaining 165 facilities, they are able to start with an empty silo and assemble a missile ready to launch, knowing that their work plays a vital role in the mission of deterrence.”

This sense of pride and gratification from their work is one of the many ways that Airmen find to combat the stigma associated with Minot.

Hoffman’s visit showed the Air Force’s clear movement towards a goal of more resilient Airmen and his interest in what Team Minot Airmen do every day to ensure the mission of AFGSC is carried out.

“I was impressed with Team Minot! I look forward to spending more time with you, listening, learning and leading come February,” said Hoffman. “Only the Best Come North!”

← Prev: Public Invited to Annual Ice Cream Social at Former Governors’ Mansion Next: The Next Generation →