Written by: BETTER BUSINESS BUREAU OF MINNESOTA AND NORTH DAKOTA 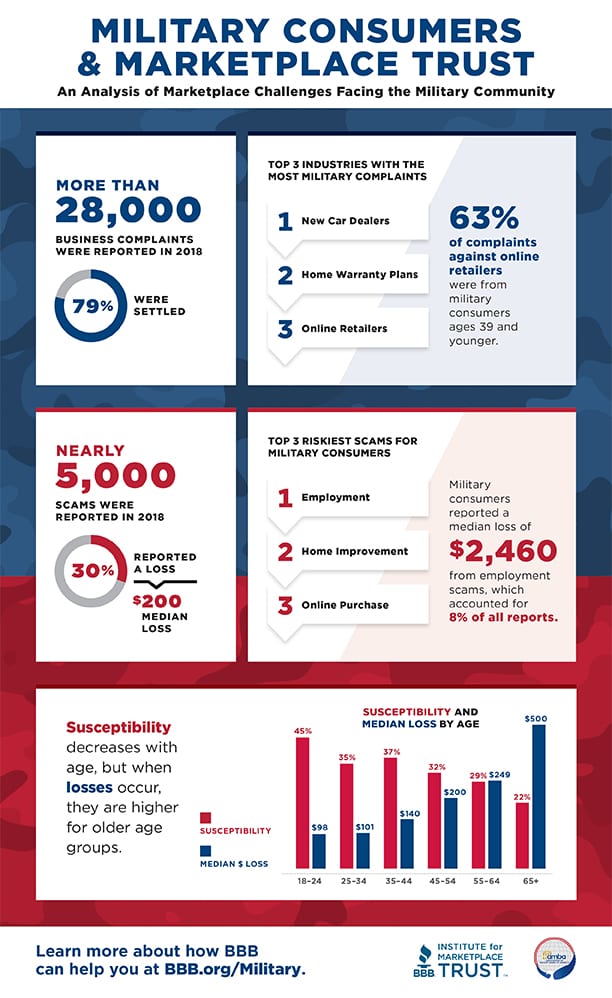 Military consumers face unique challenges in the marketplace that can result in higher median losses to scammers and other marketplace fraud, according to the Better Business Bureau’s new report, Military Consumers & Marketplace Trust: An Analysis of Marketplace Challenges Facing the Military Community (BBB.org/MilitaryReport).

The report looked at the more than 28,000 business complaints and 5,000 scam reports submitted to BBB by military consumers in 2018 and then compared those to reports of all consumers in the U.S. and Canada to highlight key differences reported by military consumers. The BBB Institute for Marketplace Trust partnered with the Association of Military Banks of America (AMBA) to release this report during Military Consumer Month.

Military consumers reported losing a median of $200 when falling victim to a scam, according to data collected through BBB Scam Tracker®, BBB’s interactive online reporting tool (BBB.org/ScamTracker). This is 32% higher than the $152 reported by all consumers in 2018.

One scenario in which military consumers are often forced to make quicker purchasing decisions than the majority of consumers is during Permanent Change of Station moves. Military consumers filed more complaints about securing and maintaining their homes, moving, and purchases related to relocation than the general population, and they also reported higher rates of losing money to home improvement scammers. Relocation can also make finding secure, stable employment a challenge for spouses and other family members.

Because scammers don’t care about legalities or ethics, education is a consumer’s best defense in preventing themselves from losing money to fraudsters. Reports like the one released today help guide the education efforts of BBB and its partners.