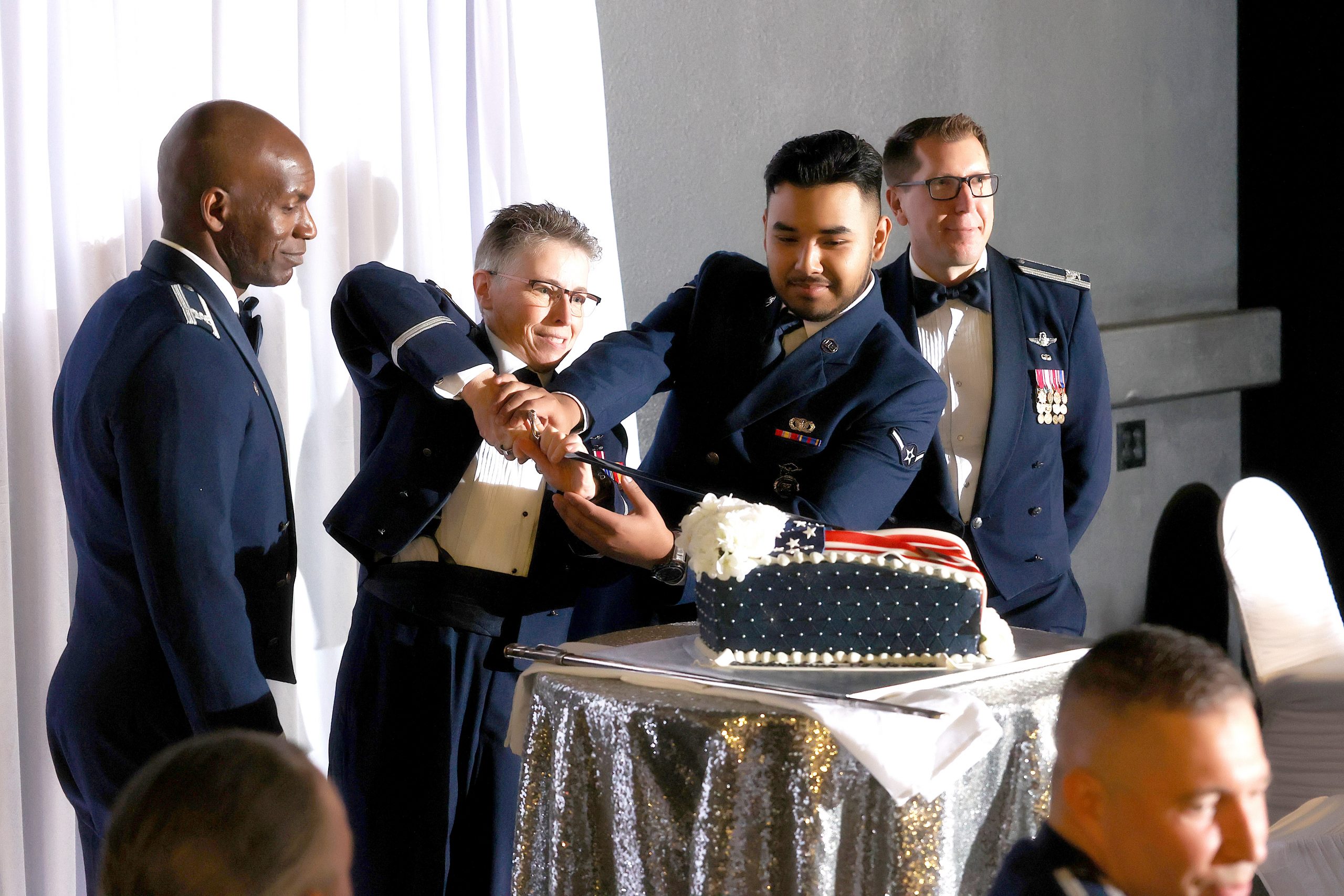 This year the Air Force celebrated its 75th birthday with the Air Force Ball. Although delayed a bit here in Minot, the ball is the once-a-year formal event for military members and their spouses as well as local civic leaders to celebrate. As this event happens every year at every base, one will find the flow and schedule for the ball becomes very predictable. Social hour, opening remarks, toasts, POW/MIA recognition, dinner, dessert, speaker, and then dancing, it almost always follows the same pattern, no matter which base. If you have been to several, it may start to feel a little like ‘you’ve been to one, you’ve been to them all’ mentality, but they are founded in tradition.

To a seasoned spouse, the quirky traditions of the AF become commonplace; however, to the first timer, the Minot civilians and the Canadian guests who are perhaps experiencing this for the very first time it can perhaps seem odd and curious why certain aspects take place at the ball. While I can’t and won’t even try to explain the Air Force mentality, I can dig into some of the AF Ball’s traditions for those new to the lifestyle to perhaps give a little more understanding behind some of the unique traditions and customs of the AF Ball for those who may not know.

The Toasts:
Every year the Toasts are written out on the ball program so guests know what and when to raise their glasses and the correct response to make. We toast to the United States, the President, the Chief of Staff of the Air Force and many more. At this year’s Ball though, I noticed something out of the ordinary. Amongst the other common toast responses was a toast to His Majesty, King Charles III. In all my years of AF events, I can never remember toasting to the King (or Queen). So, according to https://www.fieldartillery.org/the-military-ball, “When guests from another country are present, the commander or highest official of the host country proposes a toast to the head of state of the guest’s country.” In the case with this MAFB Ball, there were Canadian AF members present, so a toast to King Charles III is a nod to the commonwealth’s symbolic “head of state” and needed to be included.

The MIA/POW Table:
This table is set and left empty on purpose to remember all the American Service Members who are absent and unaccounted for. The MC’s recite the commemorative speech explaining the various items on the table and what they represent. Everything placed on the table has meaning, but some of the most touching and maybe least well-known items are the lemon and salt. The traditional AF Ball script described the symbolism in those items like this: “A slice of lemon on the bread plate is to remind us of the bitter fate of those captured and missing in a foreign land. A pinch of salt symbolized the tear endured by those missing and their families who seek answers”. This is the most solemn moment of any AF Ball as it serves a visual reminder to those not here with us. The moment is made even more poignant when the Honor Guard silently moves into positions around each place setting and sincerely places a cover (hat) of an Army, Navy, Marine Corps, Air Force, and Coast Guard on the dinner plate at each table setting in one soft motion. This table, otherwise known as the ‘Missing Man Table’ can have a few variations in its set up, but the tradition came about around the time of the Vietnam War. As is sometimes the case with military traditions, the specific documentation of where the idea started has become muddled over the years and no clear person or place can unilaterally claim the first ‘Missing Man Table.’ Instead, the ceremony erupted and still stands today as a remembrance of those who have never made it home. To learn more about the ‘Missing Man Table,’ see the National League of POW/MIA Families, https://www.pow-miafamilies.org/missing-man-honors-table-history.html.

The Cake Cutting:
It has become a longstanding AF tradition to have the youngest Airmen and the oldest Airmen join together to cut the cake at the AF Ball. This tradition is also joined by cutting off the cake with a sword or saber. Research does not reveal why or when this first happened, but it is just one of those things that happens during these celebrations. Occasionally, the cake cutting honors will be bestowed upon the most junior ranking and the most senior ranking Airman despite age. It isn’t clear if age or rank dictates who gets this honor, but it seems to be a mix of the two and a little dependent on the individual ball itself. At this year’s ball, they had pre-orchestrated these two members, alerting them ahead of time, but some Balls make it a little more spontaneous with the announcers addressing the crowd and searching for these members amongst the crowd, which I think is the more fun way to do it. Either way, it is a fun tradition to honor the newest and longest serving Airmen.

There you have it, a few of the Air Force Ball’s traditions explained. Military organizations often have their own language and way of doing things that seem normal once you’re in, but can be jarring and confusing for the newcomer or outsider. Sometimes I forget about the staunch transition into military life and how long it took me to understand the Air Force “isms”. I still don’t understand even most of the AF terms-which I am ok with- but it’s good to be reminded to look at things from an outside perspective from time to time.

← Prev: Dakota Elementary: More than a Place to Learn and Work Next: A View From Our Side: So, What’s The Scoop on Turkey? →