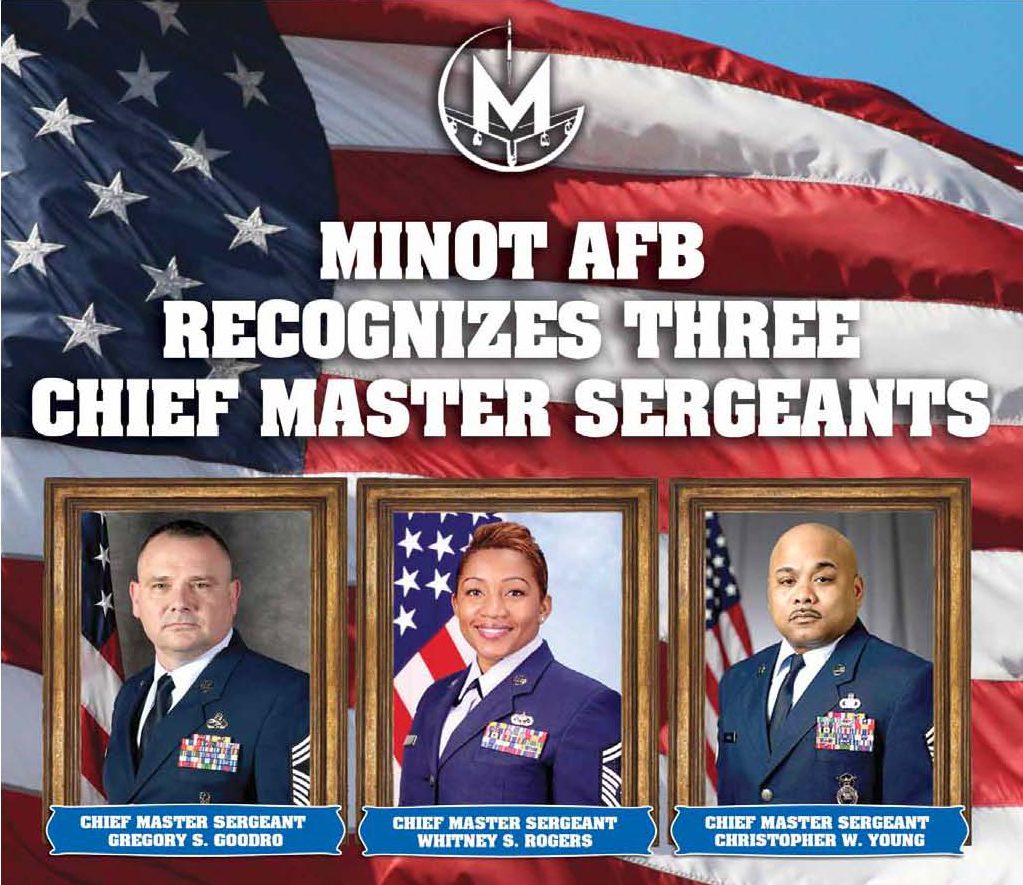 A native of Union City, Tennessee, Chief Master Sgt. Whitney S. Rogers has been in the Air Force for 17 years, following right in her father’s footsteps. “He was in the Air Force, and so I wanted to go to the Air Force,” shares Rogers. “To be honest, I joined the military because of the schooling options. The recruiter came to our high school and gave us a spin on how the tuition would be 100% free.” After joining, her career took her worldwide. “My first base was Ramstein for two years. Then I went to Osan, Korea for a year, left there and went to Kadena Air Force Base in Okinawa, Japan for two years. [I] eft Okinawa and went to Andersen AFB in Guam. My first state side base was Tyndall AFB in Panama City, Florida.” Then, Rogers found herself in San Antonio, Texas working at the Air Force Services Center and the Installation and Mission Support Center. Eventually that would lead her to Minot, North Dakota, where she arrived in May of 2021 to work in the 5th Force Support Squadron. Her stay in Minot is short lived, however, as she is headed to Peterson Space Force where she will join the Unites States Space Force, working with the 21st FSS.
When Rogers joined the Air Force, “I had my eyes on being a First Sergeant. I did not think I was going to be a Chief until I made Master Sergeant. I had some very great mentors that kept me forward thinking, and I began to see myself in their shoes. Had it not been for my mentors and my faith, I would not be this far,” she says. CMSgt Rogers continues to be an inspiration for her eight year old son, Tavon, her 12 year old daughter, Tova, and the Airmen in her charge.
Chief Master Sgt. Gregory S. Goodro was born in Idaho where he lived until he was in third grade. He then moved to Wheatland, Wyoming where he would, in his words, “grow up,” graduate from high school and join the Air Force.Now, Goodro has just passed his 25th year in the military on March 5, 2022. He and his family arrived in Minot in March of 2020, where he began working in the 5th Aircraft Maintenance Squadron. His journey here included a diversion and a choice of bases, but he chose Minot because of the B-52s and the nuclear mission. “I’m a weapons guy by trade,” Goodro says. Making Chief in Minot will allow him to continue his career a little longer, “but the end of my career was definitely on the horizon when I came here.” Goodro did not imagine himself as a Chief Master Sergeant when he entered the Air Force. “I was that four-year guy; [I saw it] as an adventure and a temporary thing.” His first station was Luke AFB, Arizona, and it was more of a patriotic move for him to join the Air Force. “I had a great deal of respect for people who join the military. I looked at it as an opportunity, and I could say that I fought for my country.”
Goodro’s advice for younger Airmen is to “go someplace for three years, work your tail off and then apply to go to somewhere that you never imagined that you would live. Work hard, and of course, enjoy life when you are off.” As far as being chosen for Chief Master Sergeant? “Becoming a Chief is about your ability to be resilient. I have had so many great mentors that have influenced me in my life, that have never made Chief Master Sergeant. It’s a lot of sacrifice, and doing what it takes to make things happen.”
Chief Master Sgt. Christopher Young is originally from Harrisburg, Pennsylvania, and he too celebrated an anniversary in March of 2022. “I have been in the Air Force for 23 years on March 24th, and I have been in Minot for nine months,” he remembers.
9/11 would drastically alter CMSgt Young’s military journey. “I just wanted to enlist for four years and then get out. Being a Chief Master Sergeant was not really my goal, I really wanted to see the world a little bit,” he shares. “But then things changed, and I changed. I was stationed at Polk AFB, and my first assignment was Security Forces.” Young’s list of deployments began to grow and to date he has had eight different deployments, including four overseas. Included in those deployments was a long tour in Japan, one at Joint Base Andrews, Maryland, and even a tour at the Pentagon.
But opportunity knocked. That opportunity was the 5th Security Forces Squadron at Minot AFB, and Young saw this move “as the best opportunity to reach as many Airmen as I could, to share my experiences. I saw it as a challenge and so I was pretty excited to take it.” The position was the challenge he was looking for. “We have the largest Security Force of all the bases in the U.S. It’s a challenge, every day.”
CMSgt Young is married, and he and his wife Nica have three kids; Moises who is 14, Lukas who is 12 and Naomi who is seven.
“I pride myself in staying in shape. I work out every day, and I plan to retire once my assignment here ends in the coming year,” he explains.
When asked about highlights of his time at Minot AFB? “I can honestly say that we have gotten a lot accomplished, and I know that I will finish what we started here, and leave it better than when I got it.”