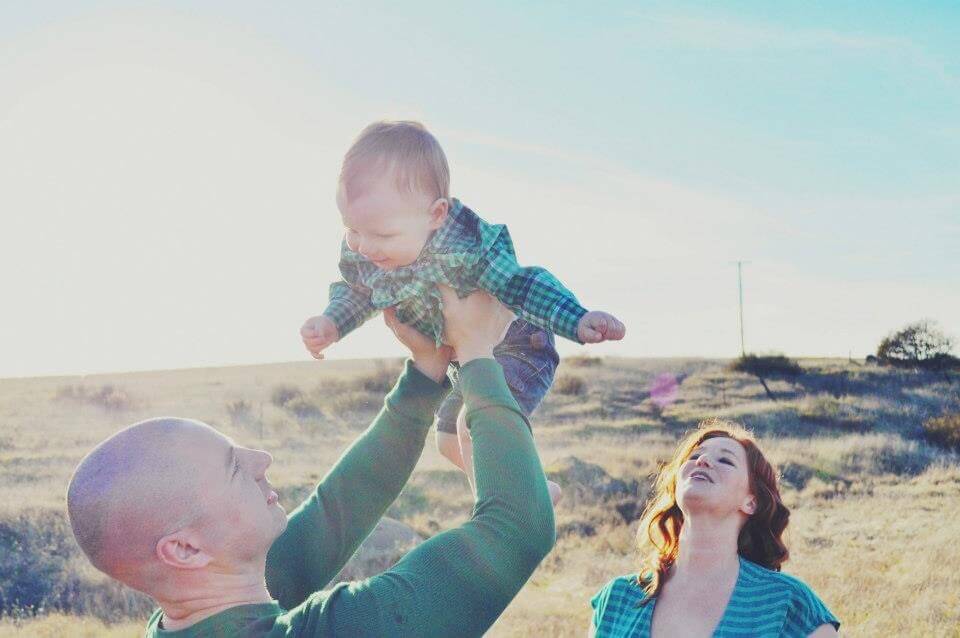 White says having her first child reset her hormones. She was good for two years after. submitted photo

Depression is a common and serious illness that negatively effects how a person feels, thinks and acts, according to the American Psychiatric Association. Although more than 300 million people worldwide suffer from depression, some are still hesitant to admit they struggle with it because of the stigma it carries.
When someone is predisposed to depression, what impact does military life, more specifically deployments, have on their illness?
Sara White, a military spouse and mom of four, recently opened up about her diagnosis on Facebook. She shares how finding the right balance of self-care and medication brought her out of her funk and back to enjoying her family and the military life she loves.
White was predisposed to having depression and anxiety. In her teen years she was diagnosed with anxiety, but it wasn’t until her husband’s first deployment that her depressive symptoms fully manifested.
White recalls, “I was 23 years old. The doctor saw me for only ten minutes then diagnosed me with post traumatic stress syndrome, obsessive compulsive disorder and generalized anxiety. He threw a bunch of medication at me.”
While taking the medicine, White was asked if she felt better. “I don’t feel anxious or depressed. … I don’t feel anything.” In fact, she describes it as feeling, “very nothing.”
After her husband returned from deployment, she became pregnant and had to stop using everything that was prescribed so she looked to self-care options as an alternative. This included yoga, meditation, walks and focusing on her breathing.
It worked. She felt great, even after giving birth. She continued her self-care routine and became pregnant with their second baby.
Deployment and mental health
Military medical research reveals pregnant women with a military-deployed spouse have increased risk of depression and self-reported stress.
White’s second child was born two days after her husband deployed.
“Looking back, I can say I was wildly depressed. But I absolutely didn’t get treatment. I didn’t have the time,” she said.
White didn’t want to tell the doctor that she was, “thinking of leaving the house and not coming back.” She didn’t want to say she “didn’t love being a mom and didn’t like her kids.”
She was afraid she’d be reported. So, she silently suffered through it.
There are terms used in the military spouse community like “holding down the home front” or “being resilient.” While these are valid descriptions of the support spouses provide, they can also keep them from admitting they are having a hard time coping with the military lifestyle.
White’s husband is an EOD technician. Since their marriage nine years ago, he has deployed four times. After noticing how depression impacted his wife, he offered to turn down an assignment due to his family needing him. However, she declined his offer.
White admits that she didn’t want to be seen as “one of those women who was unstable and couldn’t handle her husband being gone.” She felt pressured to be strong.
Finding support
One thing White attributes to helping her during deployments is having a battle buddy.
“I try finding a new battle buddy every deployment. I want to help someone. There’s nothing like a first deployment because you don’t know what it’s going to be like,” she explained.
Military spouses, Nikki Kling and Danielle Scarpello, who are also wives of EOD technicians, are part of White’s support system.
“I always feel like I’m the only one aggravated about deployment, until Sara says something. Then I don’t feel so alone. She constantly makes me laugh which absolutely helped,” Scarpello said.
Kling adds, “Being an EOD wife has it’s unique challenges regardless of whether our spouse is on a deployment or not. My friendship with Sara began at a perfect time, as my husband and I were getting ready to embark on our second deployment.”
Both Kling and Scarpello didn’t know about White’s depression for a while, but Scarpello said she wished she did so that she could have helped her.
The transitions of military life continue
By 2017, White gave birth to twins and they became a family of six. Then, a year later, the White family relocated to Hawaii. Other than a one–year training, this was their first move and she was leaving the place where she grew up.
“A week after we got to Hawaii my husband deployed. I was alone in a new place with four kids,” she said. “That was the worst depression I’ve ever had. I gained 30 lbs. in three months and I was miserable.”
White’s time was filled with isolation, constant sobbing, grieving family and friends she’d left, and a general lack of interest in life. She didn’t care what she ate or how she looked. Her husband spoke with her about seeing a psychiatrist and when her mother came for a visit, she finally had the time.
“This new doctor listened to me for two hours,” she said. The psychiatrist worked with her to find a good balance of medication that fit her life, but it wasn’t a one step process.
She offers advice to others who can relate to her experience:
Don’t believe the myth that your depression will negatively affect your spouse’s career. The military wants us to be healthy and strong and offers resources.
Make a battle buddy. Have them over for coffee and scones and tell them to be your friend.
Lean on your spouse. I never want to be a burden, but I have to remember that he chose to marry me just like he chose to be a Marine.”
Free counseling services are offered through Military OneSource by calling 1-800-342-9647. You can also reach out to your primary care manager for help.
This article originally appeared in Military Families Magazine.