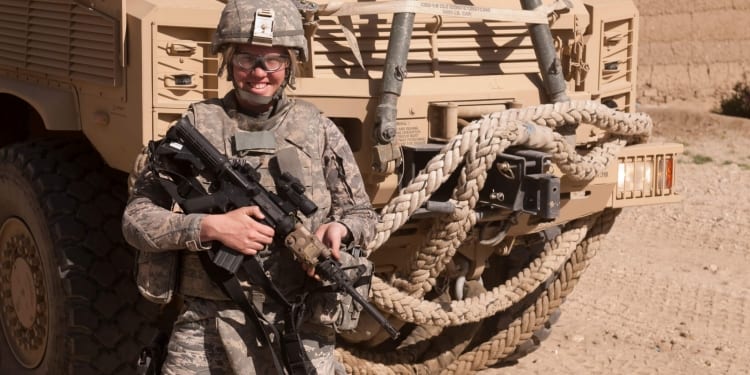 After grappling with her own identity crisis after leaving military, an Air Force veteran is shining a spotlight on the lesser known experiences of women veterans.
“We’re invisible, it’s not like that stuff comes up at playdates,” Amanda Huffman, Air Force veteran and author of “Women of the Military,” says about the plight of women veterans.
In 2013, Huffman transitioned from a career as civil engineer in the Air Force to military spouse and mother. The shift left her questioning the importance of her new roles, which often took a back seat to that of the missions her husband received.
“From the outside, it doesn’t look that challenging, I understand [his] mission, but now I have one too,” she said.
The identify crisis veterans face after the end of service forces America’s bravest to look deep within. A time for deep introspection and true reflection, it is a refuge few, if any, are given the opportunity to wrestle with before ties are cut.
“The lie I was telling myself was that blogging about my service meant I hadn’t moved on. I was a mother, why wasn’t I writing about motherhood?” she said.
Huffman suppressed the struggles she felt during transition until she found a therapeutic outlet that would soon help her realize she was not alone. While dedicating her blog to 31 days of deployment stories, she was shocked to see just who answered the call: a resounding flood of women veterans. In fact, the influx eventually led the submissions to transform into a book focused on some voices speaking up for the very first time to proclaim their full identity.
“Without a platform, it’s just easier to let go, to cope with the unacceptance,” Huffman explained.
“Women in the Military” gives readers a peek into lives of women who serve, but told from their own perspective. Experiences are refreshingly shared without an agenda, without being retouched to reflect any sort of light or shadow cast over service.
“We don’t meet the masculine character of a soldier as many would assume. The thing is, we were never meant to,” she said.
America’s preconceived notions of what a veteran looks like is perhaps best illustrated by closing one’s eyes and describing what comes to mind with the words solider or war. Huffman herself admits male images dominate even her own mind.
“I remember raising my hand when the speaker called for veterans to do so. I watched as men were repeatedly thanked for their service, while I received nothing. Did they think I was a spouse confused by the question?” Huffman recalled. “I don’t think society knows what to do with us yet.”
Resources for women veterans are slowly starting to take shape as advocates, like Huffman, demand equal attention for equal service. She adds that mentorship is an important piece of this puzzle, especially for the newer recruits entering service.
Going into service with the clearest picture possible is important for women, Huffman says, and it’s why she solicits feedback in each interview from her book asking, “What would you tell women who are considering joining the military?”
Amanda Huffman hosts a weekly podcast and “Women in the Military” is now available for purchase on Amazon.
This article originally appeared in Military Families Magazine.