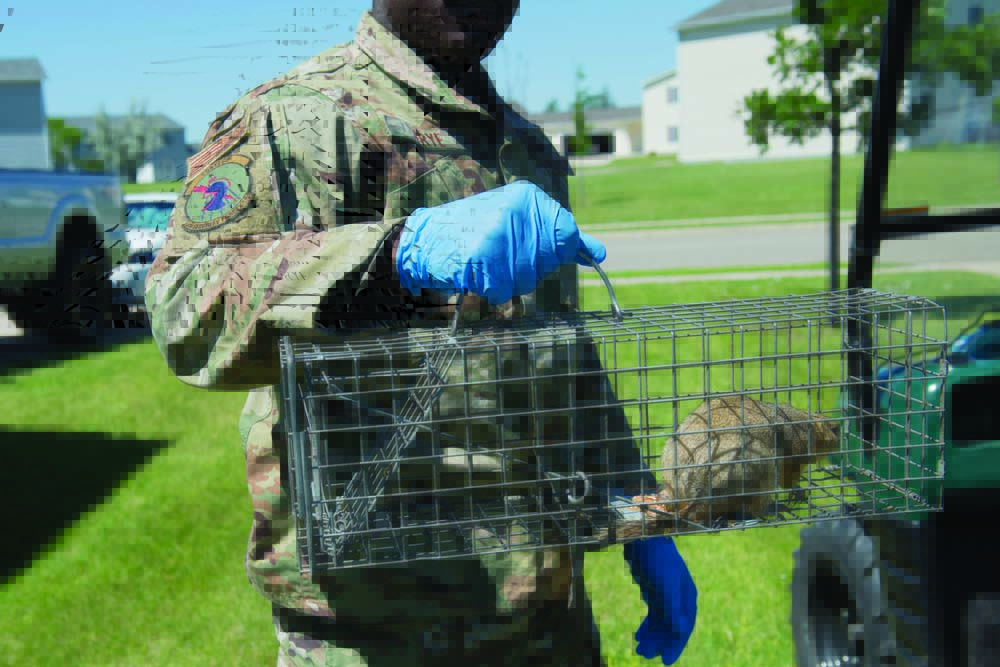 One lone intruder. No problem. Ten thousand intruders is a different story entirely, especially when they are rodents.

The Richardson Ground Squirrel, also known as the “Dakrat”, is not normally an invasive species. Since the removal of their natural predators on base, however, their population has significantly increased in numbers, causing damages to mission essential infrastructure and homes across the base.

“There is no way to know how many there are,” said Nicholas Lester, 5th Civil Engineer Squadron pest management supervisor. “We eliminate three to five thousand a year. To say there are over ten thousand is a justifiable estimate.”

In an effort to reduce the population, guard against diseases and reduce damages the 5th CES pest management shop in coordination with Balfour Beauty Communities has created a comprehensive four-pronged approach to fix this problem. The four prongs can be separated into chemical removal and non-chemical removal methods.

Methods of chemical removal will include both gas and poison. The gas, approved by the Environmental Protection Agency for this use, will be administered into the dakrat tunnels starting in the Prairie Rose Estate Neighborhood. Contractors will administer the gas only in tunnels and will fill holes as they proceed. The final method of chemical removal will be increased amounts of EPA approved poison already in use in open grassy areas. The chemicals are safe to use around human and pets alike but residents are advised to refrain from direct contact with treatment devices.

The methods of non-chemical removal will include both flooding and trapping. Contractors will begin flooding tunnels in the Sunflower Haven Neighborhood to drive the dakrats into open areas to be trapped or poisoned. Trapping on base will be done by the 5th CES pest management shop and in some areas of housing. Residents are advised to not release animals in traps or tamper with them for their safety and to ensure mission success.

“I think they need to understand is that, yes, they seem like cute and cuddly animals but for base infrastructure they are a real problem,” said Marchessault. “They are degrading runways, platforms, foundations, and housing. They are causing the base lots and lots of money.”

The dakrats pose a significant health risk to public safety because of their ability to carry and spread diseases. While residents should expect a reduction in population and less holes in their lawns, it will be a continuous issue that will need to be addressed yearly.

Next: Thousands Of RVers Flocking To North Dakota →